People have been searching for the cause of mental illness since ancient times. The Greeks believed that mental illness was a religious issue or a personal problem. In the Middle Ages mental illness was thought to be due to demonic possession. Priests treated the mentally ill with all manner of tortures. These negative beliefs continued through the 18th century even in the United States. This lead to the stigma that is currently attached to mental illness in general. It was not until the 1980s and 90s that this stigma began to improve.

Many people now understand that mental illness is a disease just like diabetes and heart disease and researchers began working on finding what causes it. According to the National Institute of Health, recent advances in genetics have uncovered genetic links to five of the major mental illnesses. In order to understand what roll genetics plays in mental illness it is important to understand how inheritance and family affects these disorders. 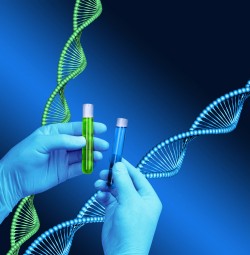 It is known that some mental illnesses are passed down genetically.

Recently researchers studying the link between family and autism found that there are a few common gene mutations that trigger autism. Previous studies suggested that autism was not inherited but due to environmental factors or even vaccines. The study stating that vaccines caused autism was retracted a few years ago when found to be false. New information more than suggests that several of the autism spectrum disorders are caused by the CHD8 gene mutations. It is possible to inherit these mutations.

It would be unfair to say that all autism is inheritable. According to the National Human Genome Research Institute, autism both genetics and environment cause autism. Sometimes people with the illness have a genetic vulnerability to environmental factors. These factors can include:

Autism spectrum disorders are all characterized by issues with communication problems and impaired social skills. There are so many different disorders in the autism spectrum that it is difficult to pin down an exact gene that links family members to the autistic in the family.

Although attention deficit hyperactivity disorder (ADHD) is not technically a mental illness, it has the same symptoms as one. It is characterized by hyperactivity, the inability to pay attention, poor concentration, poor ability to reason, and difficulty problem solving. Researcher can identify three main causes of ADHD. These are:

One of the diagnostic criteria for ADHD is family history. Normally when someone is diagnosed with ADHD members of their family also have symptoms of the disease or have a diagnosis. Geneticist are fairly certain that there is a family or genetic link to this disorder.

Bipolar disorder is a mood disorder characterized by periods of intense mania (hyperactivity and grandiose beliefs) that crashes into a deep depression. In severe bipolar disorder, the mania causes a person to take unnecessary risks or become violent. The depressive phase is also extremely severe.

Most people who have bipolar disorder also have children who are also bipolar. The family link for bipolar disorder is extremely close. The researchers at the Genome Project identified two single-nucleotide polymorphisms that are linked to bipolar disorder in all family members that suffer from it. This is a clear indication that it is an inherited genetic disease.

Major depressive disorder is one of the most prevalent mental illnesses in the United States. It is expected to be the second leading cause of disability in a few years. According to the University of North Carolina study, “Major Depressive Disorder: Stage 1 Genomewide Association in Population Based Samples,” major depressive disorder shows that it is inherited around 40 percent of the time. This means that 40 person of the people with major depression will have children who also have it. All studies show that the familial risk of inheriting it is an extremely close one, meaning it is passed parent to child rather than skipping a generation or is recessive for several generations.

Schizophrenia is a psychotic disorder. There are several variations of schizophrenia including paranoid, delusional, and combination. According to the study, Genome-Wide Association Study of Schizophrenia, it is an inherited disorder. If a family member has schizophrenia, there is approximately an 85 percent chance that a child will develop it. It also has a close familial tie, meaning those who get it are closely related to the family member who has it. Parents who have it have a good chance of having children who do also. Through family studies, twin studies, and adoption studies, scientists have concluded that the risk of schizophrenia travels through family lines regardless of environment.

It is important to realize that genetic vulnerabilities do not necessarily mean inheritance. In the case of mental disorders, a parent does not necessary have to show symptoms for a child to have it. Many disorders are a combination of inherited genetics, mutation, and environmental influence. With so many variables, it is difficult to determine what is genetic and what is environmental. Scientists know there is a link between family genetics and mental illness but cannot pin down that link yet. This is why there is continuing research on both genetics and mental illness.