People with social anxiety disorders feel shy or scared during social situations.  They experience overwhelming fears that disrupt their ability to enjoy life.

What Are Social Anxiety Disorders? 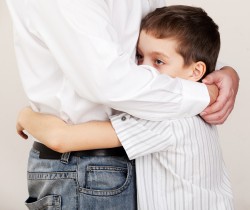 A social anxiety disorder can cause children to be extremely shy.

How Common are Social Anxiety Disorders?

What Symptoms are Associated with Social Anxiety Disorders?

When to Seek Treatment for Social Anxiety Disorders?

It is normal for people to experience some degree of fear in social situations, such as public speaking. However, these fears should not interrupt one’s life. If the social fear becomes very severe, presents physical symptoms, or is causing disruption to your life, then it is time to seek treatment from a trained professional doctor or counselor.

Social anxiety typically begins during childhood and progresses into adulthood. There are several possible causes of social anxiety disorders including:

How Are Social Anxiety Disorders Treated?

Social anxiety disorder is most commonly treated with cognitive-behavioral therapy. This method has shown to be very effective in treatment. The cognitive aspects of therapy aim to challenge your thought process and teach you how to identify fears that are not rational. You may also be encouraged to explore how your irrational fears are negatively impacting your life.

The behavioral therapy approach is usually systematic and broken down into distinct parts complete with goals. For example, the first part of behavior therapy for a social anxiety disorder is learning relaxation techniques, which can be utilized in social settings. Then, you may be slowly introduced to social settings in a controlled, step-by-step manner. This process is known as systematic desensitization and it has proven very effective for phobias, including social anxiety disorders. Behavioral therapy often involves skill training, such as learning social skills that aid in effective social interactions.