Inhalant disorder involves substances that can be sniffed and can acquire rapid absorption through the respiratory tract tissues and enter the bloodstream, and thus travel to the brain. Inhalant abuse is also known as “huffing”. Inhalants are very volatile chemicals and are classified as organic compounds. Sniffing of inhalants can cause rapid addictive effects such as acquiring a ‘high’. Inhalant Use Disorder has been characterized in the proposed revision of DSM-V as well.

Some of the substances that are found commonly and can be used as inhalants are cleaning products, aerosol sprays of some kinds, glue, paint thinners, gasoline, petrol, paint and solvents among others. Those addicted to the effects produced by these substances usually pour or place the substance onto a rag or piece of cloth and sniff it. Another method of addiction is spraying the inside of a bag with the substance and inhaling the fumes thus produced. They may also simply inhale the contents of an addictive substance directly from the container. 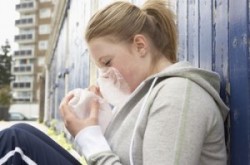 Inhalant disorder is a growing problem among our youth.

According to various surveys, it has been concluded that the usage of inhalants is most common in young ages, or among teens. This is because inhalants are easily accessible and available at homes and in the form of other drugs. They are also relatively easy to use. Inhalant usage has also been found among older ages but in this case, inhalants are almost always used in combination with other drugs and rarely ever independently. This is because majority of the older users who are addicted to inhalants are financially unstable and cannot afford alternate drugs for the administration.

Inhalants induce a rapid high, but it only lasts for a short duration of time. This usually ranges from several minutes to an hour. It is for this reason that most of the inhalant abusers tend to sniff or inhale the substance continuously or repeatedly in order to remain ‘high’ for the duration of time that they desire. This method can produce lasting effects which can last for several hours at a stretch.

Inhalants are most likely to cause an overdose of the substance because of their short acting effects, and the facts that users tend to inhale the substances repeatedly for long durations of time in order to extend the effects of drug. Some of the symptoms of over dosage of the substance include convulsions, blackout, confusion, delirium, and coma. Repeated inhalation of these substances has adverse affects on the cardiovascular system and can induce an elevated heart beat which can eventually lead to heart failure resulting in death. First time users of inhalants are at a great risk of cardiovascular complications and this has been derived from the fact that there have been a number of deaths resulting from first time inhalant usage. Majority of the chemicals and substances that are used as inhalants are toxic in nature, and can accumulate in the body over the course of time lead to dangerous complications.

There are several ways of using inhalants. People can snort, sniff or even spray the substances into their mouths and noses, or in bags and containers from which they can later inhale the fumes. Liquids are usually poured onto rags and pieces of cloth from which the vapors can be inhaled.

The high associated with inhalant use is short lived and only lasts for a short duration of time which generally makes the users sniff the substances repeatedly and consistently in order to achieve the desired effects for a longer duration of time. This practice is very dangerous is it allows for more chemicals to enter the body, accumulate in the blood and damage the tissues.

How Can Inhalants Kill?

Inhalants can be as dangerous as street drugs. A person can die of inhalant abuse even after trying for the first time.

Common and sudden causes of death may include:

These are usually not very severe. Withdrawal symptoms include:

Inhalant addiction or dependency requires immediate medical attention. Inhalants are present in homes, schools, and offices almost everywhere. The damage suffered by chronic abusers is sometimes irreversible and they require addiction treatment and therapy so that they can go on with their lives drug free.

Since the most common group of inhalant abusers is teenagers, schools, parents and siblings need to keep a very strong vigilance on students. Any signs such as loss of interest in friends and family, sudden drop of grades, a chemical breath, and a hazy gaze should all be red alert signals for parents, other students and teachers. Addiction treatment will have to include therapeutic programs and even residential care. Rehabs or 12 step programs are also very beneficial along with counseling.