Paraphilias are sexual disorders marked by very particular sexual fantasies and powerful sexual urges that compel the individual to seek sexual satisfaction through the use of unconventional and what may be considered to be deviant stimuli. As with other psychological disorders, people diagnosed with a paraphilia are not in control of their thoughts or their behavior.

Paraphilias are a complex sort of sexual disorder. People who are not caught up in the urges of paraphilias often find paraphiliac attractions repulsive and puzzling, such as attractions to feces (coprohilia) , animals (zoophilia), pain and humiliation (sexual masochism), or corpses (necrophilia).

Many individuals who fit the diagnostic criteria for paraphilias may also find their own actions to be highly distressing. Many paraphilias are now commonplace in many societies. For example, foot fetishism and sexual masochism are commonly practiced worldwide. However, there is a fine line of difference between healthy sexual preferences and paraphilias: paraphilias result in isolation and limit the natural bonding and expression of love and/or affection that are such a vital part of human sexual activity.

The theories of Sigmund Freud – the fear of castration, maternal separation, the Oedipus crisis, etc. – have a great deal of influence on experts’ beliefs about the causes of these disorders. Many experts believe that early experiences, particularly that first sexual experience, can cause a child to mimic sexual behaviors or to associate sexual gratification with highly emotional events of the past. In addition, some theorists believe that because fantasies and interests are very private and not shared with those who could discourage such behavior, they become an ingrained response that continues throughout a lifetime.

It should be noted that some cases of paraphilia, especially those that involve particularly bizarre fetishes or behaviors, may be symptomatic of another psychiatric disorder such as schizophrenia. Diseases of the brain can also be a root cause, as some cause disinhibition (lack of control over one’s thoughts or behavior). 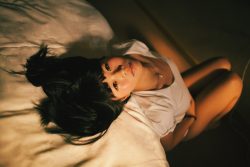 Paraphilias can lead to isolation.

The dictionary defines a fetish as “an object or bodily part whose real or fantasied presence is psychologically necessary for sexual gratification and that is an object of fixation to the extent that it may interfere with complete sexual expression.” The diagnostic criteria for fetishism goes a bit further, stipulating that this fixation and behavior must have continued over a period of at least six months and cause enough anxiety and distress to make relationships, employment, etc. very difficult or even impossible. Further, the object being used cannot be an article of clothing used for cross-dressing (that’s a very specific paraphilia called transvestic fetishism) or something like a vibrator which is designed for genital stimulation.

The sexual focus of voyeurism is the observation of individuals or couples as they undress, engage in intercourse or other activities (such as urinating, showering, etc.). Voyeurs are undeterred by the possibility that they may be caught; in fact, the risk of discovery heightens the excitement of the act.

It is thought that voyeurism provides a sensation of power over others, the need for which is inspired by feelings of social awkwardness, inhibition and sexual inadequacy.

Some experts citing Freud’s psychodynamic approach say that voyeuristic behavior is a means of reducing castration anxiety, a fear that may have originated with the sight of an adult’s genitals. Voyeurs minimize that fear by purposefully reproducing the event under circumstances that they can control. Coming from yet another school of thought, behaviorists consider voyeurism to be a learned behavior linked to a particularly exciting sexual scene.

Sexuality is a very individual thing, and paraphilias definitely show that to be true. A paraphilia is when a person feels sexual arousal from something atypical, such as inanimate objects.

Frotteurism, sometimes called groping, is an exclusively male type of paraphilia. Those who can be diagnosed with this disorder frequent crowded locations such as terminals, elevators, subways and buses and gain sexual gratification from rubbing their penises against the buttocks or other body parts of a fully clothed people. Alternately, hands are used to achieve the same effect. A person with frotteurism is most often very passive and has little if any social interaction. Normally, frottage provides their only venue of sexual release.

What are the Most Effective Treatments for Paraphilias?

What is termed “insight oriented” psychotherapy is the most common treatment for paraphilia. If patients can gain an understanding about the origins of their disorder, events in the past may lose their influence on thoughts and behaviors. They may be better able to recognize what triggers their impulses and thus control them before they’re acted upon. In addition, therapy can raise self-esteem and increase the interpersonal skills needed to engage appropriately with others and perhaps develop and maintain adult sexual relationships.