What Is Separation Anxiety Disorder?

With separation anxiety disorder, the fear of separation becomes so strong that it inhibits your daily life. If you are child with this disorder, you may refuse to go anywhere without your parents/caregivers or you may throw tantrums when your parents/caregivers leave without you. You may also have troubles sleeping alone or you may make up physical ailments in order to avoid going places where the separation will occur.

Even though separation anxiety is classified as a childhood disorder, it has been evident in adults as well. If you are an adult with separation anxiety disorder, you may get anxious when being without a certain person (such as a spouse or friend). You may also constantly worry about the person during separation; fearing that the person will be in an accident. For example: you cannot contact your husband so you repeatedly called him throughout the day or leave your own job to look for him because you fear something tragic has happened to him.

How Common is Separation Anxiety Disorder? 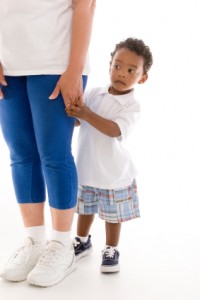 What Symptoms are Associated with Separation Anxiety Disorder?

The symptoms of separation anxiety disorder in adults and children may include:

In if you an adult with separation anxiety disorder, you may experience different symptoms then a child. Your symptoms may consist of repeatedly calling a loved one for fear they will not return. You may also go to great lengths to physically find your loved one.

How Is Separation Anxiety Disorder Treated?

Behavioral modification therapy is used for treating childhood separation anxiety. Under this approach, you are rewarded for overcoming your fear of separation. For example: you would be rewarded with a story if you went into your room alone and got into bed. Behavioral modification therapy should be done in small steps so that your confidence level increases. This should occur until you feel comfortable being alone. For childhood separation anxiety, it may also be critical for your parents to attend guidance sessions where they can learn skill that will help you overcome your anxiety.

Where Can I Find Additional Information On This Disorder?