Postpartum psychosis, sometimes called puerperal psychosis, is a sudden onset of psychosis following childbirth. As with other forms of psychoses, postpartum psychosis is characterized by a break with reality. It can cause delusions, hallucinations and highly abnormal behavior. It is a very serious condition; psychiatric illness has been reported to be the second most common indirect cause of maternal deaths. Unfortunately, many cases of postpartum psychosis are only diagnosed after the disorder has caused a tragedy.

Postpartum psychosis is sometimes seen within days of delivery and most often occurs within 8 weeks of childbirth. Symptoms frequently begin with complaints of fatigue, inability to sleep, and anxiety; women can become tearful and emotional. After a time, paranoia, confusion, irrational statements occur and mothers can develop an obsession with their baby’s health and welfare. Roughly 50% of patients experience delusions and 25% hallucinate, withsome hearing voices that tell them to kill their infants.

How prevalent is postpartum psychosis? 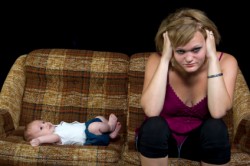 Postpartum psychosis may occur after birth is given to the baby.

Symptoms of postpartum psychosis can include:

In recent years, several cases of postpartum psychosis involving deaths of children have been brought to the attention of the public. In one case in 2001, Andrea Yates drowned all five of her children because, as she said, she was a bad mother.

Postpartum psychosis is regarded by many experts as an episode of a bipolar or depressive disorder. There is evidence that medical conditions incurred as the result of birth such as infection, a drug interaction or blood loss may cause postpartum psychosis. Certainly, the abrupt decline in estrogen and progesterone levels immediately after giving birth can have a powerful effect on emotional stability. In addition, there is the possibility that relationship discord or conflicted feelings about becoming a mother can increase the chances that postpartum psychosis will develop. Women who, previous to their pregnancy and delivery, were diagnosed with depression or a psychotic disorder, are at particular risk.

Who is at risk of developing postpartum psychosis?

Experts in the field suggest that doctors who are aware of possible risks should include these very specific questions about mental as well as physical well-being during regularly scheduled pre and postnatal examinations.

What treatments for postpartum psychosis are available?

However disturbing the symptoms of postpartum psychosis, recovery can be both successful and fairly swift in most cases. Treatment is very likely to include at least a brief period of hospitalization. Antidepressants and other medications can reduce the symptoms. Mothers may be advised against breastfeeding if prescribed certain medications.

If suicide is a serious threat, or the patient is resistant or fails to comply with a suggested course of medication, electroconvulsive therapy (ECT) may be used for treatment. Once the immediate danger has past, experts recommend some form of psychotherapy, both individual and family, to assist the mother in assuming her role as caregiver. If available, strong and consistent support from partners and family can help a great deal.

Note that, if treatment is not received, the symptoms of postpartum psychosis can be long lasting and result in serious harm to the mother and those around her, especially the future development of the newborn infant.

Where can help for postpartum psychosis be found?

There are many resources available for those who are affected by postpartum psychosis. The website found at http://www.postpartum.net/ has a wealth of information, as well as ways to connect with help in your local area. You can also read “Understanding Postpartum Psychosis: A Temporary Madness”, by Teresa M. Twomey, which includes first-person stories from women who have lived through postpartum psychosis.