Autism is defined as “a pervasive developmental disorder characterized by extreme unresponsiveness to others, poor communication skills, limited skill at imaginative play, and highly restricted and repetitive behavior.”

It’s important to know that there are three quite different types of autism spectrum disorders: autistic disorder or what is called classic autism, Asperger syndrome and pervasive developmental disorder – not otherwise specified (atypical autism). The most common form of autism spectrum disorder is classic autism. Warning signs commonly associated with autistic disorder include the following: delayed speech, social and communication problems, obsessive and/or odd behaviors such as: hand flapping, rocking and/or spinning in circles and/or learning disabilities. 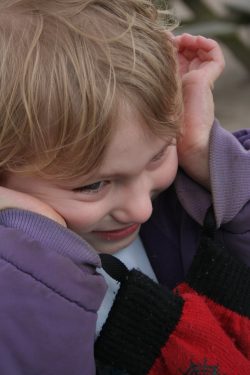 Someone with Autism  may have unexpected reactions to sounds.

If you have autism spectrum disorder, you avoid or have a strong, negative reaction to the touch of others. You react in unexpected ways to sounds, smells, textures, tastes and/or appearance. Questions may elicit unrelated answers. Other people’s emotions are a mystery to you. You do not intend to be cold or unresponsive; you just don’t understand what others may be feeling.

If you have Asperger syndrome you may have the same symptoms as someone with classic autism or atypical autism, but in milder forms and without the language or intellectual problems. Pervasive developmental disorder – not otherwise specified (atypical autism) usually causes social and communication challenges.

It may be difficult to gain an understanding of autism spectrum disorders from a list of diagnostic criteria. Click on this link to see a segment from a documentary in which a young man describes what he calls “social dyslexia”. youtu.be/WAfWfsop1e0.

While many disorders arise during your early years of life and diminish or disappear over time, autism spectrum disorders continue throughout your entire lifespan. This is not to say that the condition does not improve or that you will be unable to live a happy and productive life. An early diagnosis is essential and parents must be alert to early warning signs that may can occur from first few months after birth to 1 ½ or 2 years old. An autistic child will lose skills that they once had and be unable to learn new skills.

How Common are Autism Spectrum Disorders?

The number of autism spectrum disorders cases being reported is growing rapidly, either because of an actual increase in their occurrence, a broadening definition or greater efforts at detection. Whatever the reasons may be, the Centers for Disease Control sets the prevalence rate of autism at 1 in 150 children in the United States, 1 in every 100 in the United Kingdom, 1.7 million individuals in India and nearly two million in China.

What are the Best Ways to Treat Autism Spectrum Disorders?

Early treatment is the key to treating autism spectrum disorders. Discrete trial training is a type of treatment that separates sessions into a series of desired steps leading to the desired behaviors or responses. “Floor time” focuses on feelings, caregiver relationships and the sights, sounds and smells in the child’s environment. Speech therapy helps with communication problems. If speech is not possible, the picture exchange communication system teaches you how to use symbolic pictures to communicate with others.

Dr. Temple Grandin, author of several books about her own life with Asperger syndrome and the subject of an HBO film, frequently lectures about the need for swift and early intervention.

Although there are no pharmaceutical treatments available, medications are sometimes prescribed to help manage high energy levels, attention problems, depression and seizures. There is some anecdotal evidence that changes in diet can reduce the effects of autism spectrum disorders.

Where Can I Find Additional Information on Autism Spectrum Disorders?

Books on autism spectrum disorder include:

Thinking in Pictures: My Life with Autism by Temple Grandin, The Way I See It: A Personal Look at Autism and Asperger’s by Temple Grandin and Ruth Sullivan and Aspie Teen’s Survival Guide: Candid Advice for Teens, Tweens, and Parents, from a Young Man with Asperger’s Syndrome by J.D. Kraus

Centers for Disease Control and Prevention. (n.d.). Facts about ASDs. Retrieved from www.cdc.gov/ncbddd/autism/facts.html.