Female sexual disorders are categorized according to the phase of the human sexual response cycle in which they occur. The Diagnostic and Statistical Manual of Mental Disorders (DSM-IV) divides the process of having sex into four phases:

Sexual dysfunction can lessen or completely prevent any or all of these phases; one may experience sexual desire but none of the physical changes that make intercourse possible. One may become sexually excited but find that orgasm is elusive and thus, without orgasm, cannot the satisfaction of the fourth phase of sex.

The causes of sexual dysfunction may be biological or psychogenic (due to psychological or interpersonal conflicts). There are many possible biological reasons that a person has difficulty with sexual function; age, disease, injury and fatigue can all play a role. Lack of experience can be a factory; a young person may not know a great deal about the mechanics of sex or their bodies. There are many possible psychological influences that can affect how one thinks about, reacts to, and engages or chooses not to engage in sexual activity.

What is hypoactive sexual desire disorder? 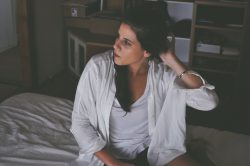 Someone with hypoactive sexual disorder lacks interest in sex.

Hypoactive sexual disorder falls into the first category of sexual dysfunction, the desire phase, and is diagnosed in persons who have a general lack of interest in sex. It can affect women and men. Because at least some degree of hypoactive sexual disorder has been reported by twenty to thirty percent of women and only 15% of men, it was until quite recently considered to be more of a problem for females that for men. However, whether due to a greater prevalence of the disorder or to an increase in the number of men willing to discuss their problem, males have been seeking therapy for hypoactive sexual desire disorder in increasing numbers over the last several decades.

The diagnostic criteria for this disorder are somewhat vague; the DSM-IV refers to a low number of sexual fantasies and desire for sexual activity. Yet, there is no specific number or amount of desire which is considered normal. Rather than trying to define what is “normal,” experts in this field have come to believe that the only time that one should concern themselves about his/her degree of sexual desire is when its lack becomes a problem, either personally or to a relationship.

What is Sexual Aversion Disorder?

As the term suggests, the primary symptom of sexual aversion disorder is an aversion to sex which can affect both men and women. Those who are diagnosed with this disorder do not merely lack interest in sexual activity; they find the prospect deeply disturbing. We live in what many consider to be a highly sexualized world; sexual images are everywhere from billboards to movies to television. For people with sexual aversion disorder, this can result in great anxiety, disgust and even fear.

What is Female Arousal Disorder?

Sexual dysfunction cannot always be placed in just one of the categories mentioned previously. Female arousal disorder can be described as an inability to maintain sexual excitement, but can just as easily be attributed to a lack of desire even before intimacy is initiated. One must also take into consideration that the degree and timing of women’s sexual desire is cyclical relating to ovulation. A diagnosis of this disorder requires that a woman cannot ever or rarely can attain or maintain sexual excitement from the beginning to the end of the sexual encounter.

What is Female Sexual Dysfunction?

Sexual disorders in women include difficulties getting aroused, problems with their sex drive, low desire, sexual pain and others. To be a disorder, these conditions are reoccurring and interfere in a woman’s life.

What is Female Orgasmic Disorder?

The reasons that a woman may not have an orgasm are varied and include emotional trauma and abuse and the anxiety and depression that such experiences can bring, excessive use of alcohol, medications used to control blood pressure and depression, pelvic floor prolapse (sometimes the result of childbirth, surgery, age or spinal cord injury) and, finally, a sexual partner’s lack of technique. Further, men and women can believe that sex must inevitably end with an orgasm and the pressure that this attitude can create can actually prevent the climactic moment from occurring.

Where Can I Find Additional Information on Female Sexual Disorders?

There are several non-clinical books which can help women better understand sexual disorders and how to overcome them. The books For Women Only, Revised Edition: A Revolutionary Guide to Reclaiming Your Sex Life by Jennifer and Laura and Elisabeth Bumiller and Reclaiming Desire: 4 Keys to Finding Your Lost Libido, written by Andrew Goldstein and Marianne Brandon, are two highly-recommended choices.

It is important to note that the DSM-IV criteria include the proviso that, for a diagnosis of a disorder, the symptoms must not only be present, but must be causing distress to the individual. Thus, the presence of a female sexual problem does not always necessitate treatment.