Dysthymia is a type of mood disorder that is normally associated with mild, chronic depression. The depressive symptoms commonly associated with dysthymia are similar to symptoms of major depression only not as severe. The key diagnostic criterion for adult dysthymia is: you have had depressive symptoms, the majority of the time, for at least two years. The key diagnostic criterion for pediatric dysthymia is: you are more irritable than depressed and your symptoms have been evident for at least one year. Because dysthymia is not as severe as major depression, it can go unnoticed or dismissed as a personality trait for years.

Dysthymic mood disorder is not limited to a single age group; children, adolescents or adults can be diagnosed with this chronic disorder. This condition is characterized by irritability in children and adolescents and depression in adults. The most important diagnostic clue is the stability of your symptoms. If you are depressed or irritable the majority of the day – every day for a year or more – you may have dysthymia.

What Symptoms Are Associated With Dysthymic Mood Disorder? 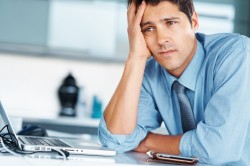 If you suffer from dysthymic disorder, you may experience irregular eating and sleeping patterns, fatigue, inattention and/or feelings of hopelessness – all to a lesser degree than what would be found in major depressive disorder. You may also experience behavioral and personality changes personalities such as changing to a person who is accommodating, considerate and/or understanding to one who is sarcastic, whiny and/or extremely demanding. In addition, you may have sexual problems such as impotence. It is also not uncommon to have problems maintaining a close, emotional connection with another person.

It is believed that dysthymic mood disorder is caused by genetic factors however environmental stressors may also lead to dysthymia. This disorder is also linked substance addictions, cyclothymia and anxiety disorders.

What Is The Prevalence Rate Of Dysthymic Mood Disorder?

How Is Dysthymic Mood Disorder Treated?

As in many mood disorders, dysthymic mood disorder treatment consists of a combination of medication and therapy. Anti-depressants may ease the symptoms as you begin therapy. Cognitive behavior therapy is considered the most effective treatment for dysthymia. Behavior therapy helps to increase your activity, your ability to relax and also encourages you to develop a more positive outlook, while cognitive therapy stresses the replacement of negative attitudes and beliefs with new ways of thinking. Other methods of therapy can also be used in the treatment of dysthymia.

What Is Cyclothymic Mood Disorder?

Cyclothymic mood disorder consists of both mania and depression. This condition is considered a milder form of bipolar disorder. If you have this disorder, you may have periods of intense mania interspersed with major depression. If you have cyclothymic mood disorder, you will be able to function, but you may not be able to function well. You may experience rapid fluctuations in moods that can alter how you feel from moment to moment or day to day.

What Is The Prevalence Rate Of Cyclothymic Mood Disorder?

Between 3 and 10 percent of all psychiatric patients has been diagnosed with cyclothymic mood disorder. About 30% of these cases have a family history of bipolar I disorder. Cyclothymia occurs equally in men and women.

There is evidence that cyclothymic disorder is genetically inherited. However, some experts believe that environmental factors such as personal traumas can also contribute to the development of this disorder.

What Symptoms Are Normally Associated With Cyclothymic Mood Disorder?

Cyclothymia is divided into two distinct phases: the dysthymic phase and euphoric phrase. During the dysthymic phase, you may experience inattention, social isolation, apathy, self-neglect, changes in eating or sleeping habits, loss of libido and/or continuous periods of sadness and despair. During the euphoric state, you may be more inclined to take unnecessary risks, develop an exaggerated self-esteem and/or experience quick thought processes, rapid speech, reduced sleep, inability to focus, hostility and/or an unusually good mood.

Often, symptoms normally associated with the euphoric state are dismissed because they may present as excessive productivity. If you have this condition, more than likely you welcome the euphoric state. It is the dysthymic state (depressive state) that typically causes you the most concern.  The dysthymic may prompt you to seek treatment. Regardless of which phase you are experiencing, your behavior, emption and thought processes will be affected.

How Is Cyclothymic Mood Disorder Treated?

There is no cure for cyclothymic mood disorder. It is a chronic condition and the goal of treatment is to reduce your symptoms and help you develop lifetime coping strategies.

Medications such as anti-depressants or anticonvulsants may be prescribed to help you control and stabilize your moods. Therapies such as cognitive behavior therapy, psychotherapy and/or family therapy may help you and your family and friends develop coping skills for managing the disorder.