Your brain has an internal system for dealing with stress or perceived threats. This system is known as the “fight or flight” response. When it is triggered, your body responds by going into survival mode. When this occurs you may experience numerous physical and psychological effects.

Panic disorder is a type of anxiety disorder in which your body triggers the “fight-or-flight” response with or without any apparent reason. Panic attacks can also with or without reason. When panic attacks occur as a result of a known cause, a physician may determine that you have another type of anxiety disorder. Childhood panic disorder symptoms are similar to adult panic disorder symptoms however children are not as likely to have the cognitive symptoms commonly associated with panic attacks, such as feelings of an impending death or dissociation from reality.

How is Childhood Panic Disorder Diagnosed? 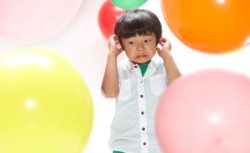 Childhood panic disorder can cause panic attacks in children.

A sole episode of a panic attack does not necessarily mean that a panic disorder is present. To meet the diagnostic criteria established in the Diagnostic and Statistical Manual of Mental Health Disorders, fourth Edition (DSM IV), a panic disorder must meet these requirements:

A) A panic attack is a distinct period of fears or discomfort which includes at least four of the following symptoms: changes to heart beat, perspiration, shakes, breathlessness or troubles breathing, a choking feeling, pain or discomfort in chest, feeling nauseous, dizziness/fainting, dissociation from reality or ones sense of self, feeling out of control or crazy, fears of death, feeling numb or tingly, or chills/hot flashes.

D) The panic attacks are not caused by external factors like medications, drugs, or a medical problem.

E) The panic attacks are not part of a different mental health disorder, such as agoraphobia.

It can be very difficult to diagnose childhood panic disorder because external factors like health complications must first be eliminated. If you have this disorder, you may have trouble vocalizing your symptoms, which can further complicate the diagnosis.

How Common is Childhood Panic Disorder?

What are the Symptoms of Childhood Panic Disorder?

If you are a child and you have a panic disorder, you will have distinct panic attacks, which are easily identifiable by often terrifying symptoms. However, having panic attacks alone does not mean that you have a panic disorder. For you to be diagnoses with childhood panic disorder, your panic attacks must be causing you significant distress or impairment. You may also experience other symptoms that are related to these distresses/impairments such as social avoidance, changes in behavior, and poor school performance. In addition, you may be more likely to have comorbid mental health disorders such as depression.

It is believed that a specific stimulus initiates the first panic attack and this panic attack triggers panic disorder. There are numerous possible causes of a panic attack, which are not related to mental health such as hyperthyroidism, drug use and/or breathing problems.

Some of the risk factors for panic disorder in children and adults include a family history of panic disorder, other mental health disorders (particularly post-traumatic stress disorder, substance addictions, and bipolar disorder), and/or stimulant consumption (such as coffee or colas).

How is Childhood Panic Disorder Treated?

There have been little to know studies on the treatments for childhood panic disorder. Generally, treatment for childhood panic disorder resembles the treatment for panic disorder in adults. Medications may be used to reduce frequency or severity of panic attacks. Antidepressants have shown effective in this manner, but they tend to take several weeks before their benefits become evident. For fast-acting control of panic attack symptoms, sedation drugs such as benzodiazepines may be prescribed. However, these drugs must be prescribed and used with extreme caution because of an increased risk of dependency and side-effects.

Cognitive behavioral therapy (CBT) has proven to be one of the most effective methods of treating panic disorder. The cognitive aspects of therapy help you realize the triggers that cause and/or aggravate your panic attacks. Behavioral aspects of therapy often involve relaxation techniques for coping with anxiety and dealing with panic attacks should they occur. Generally, a combination of medications and psychotherapy is recommended as the most effective treatment for childhood panic disorder.