Avoidant restrictive food intake disorder is a disorder in which food or eating is avoided to the extent that nutritional requirements are not met and a considerable amount of weight and energy is lost. This disorder is most commonly seen in children and is different from other eating disorders such as bulimia nervosa and anorexia nervosa.

Food refusal is simply the name given to the behavior whereby children get their own way by refusing the food that is being fed to them. In some cases, this may indicate different food preferences of the child, which may normalize the situation. This has to be differentiated from Avoidant Restrictive Food Intake Disorder in which the child is severely harmed due to selective or restrictive eating habits. Food refusal, which may be inconsistent, does not in any way pose hazards to the health of the child, the way ARFID, does. The condition is often considered to be a manipulative behavior on the child’s part, but experts believe that it may also be associated with some form of stress, anxiety or sadness. 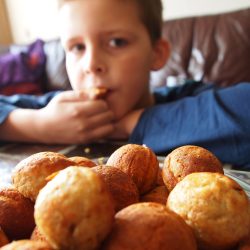 Selective eating is a subtype of ARFID where a child will only eat certain things, leading to nutritional deficiencies.

The DSM-5 has set the following diagnostic criteria to diagnose the condition and set it apart from other eating disorders:

Feeding or eating disturbances (which may include, but are not limited to the decreased interest towards food or eating in general; avoidance which is associated to the sensory characteristics of food; increased concern towards the various consequences or disadvantages of eating) the manifestations of which may include the repeated failure or inability to meet the ideal energy and nutritional requirement and needs, which are related to one or multiple of the following:

The following factors also have to be taken into consideration

There are no facts to support any lack or shortage of food availability, or any other culturally sanctioned belief or practice that can support the theory. These theories are not accountable for the development of the disorder.

The disturbances in eating patterns do not occur only during episodes of disorders such as Bulimia Nervosa or Anorexia Nervosa. There are also no proofs of other disturbances whereby the shape of the body or the overall weight of the body is affected.

The disturbances in eating patterns are not associated with other mental or medical conditions.

It has been noted that restrictive/avoidant food intake disorder, commonly known as ARFID originates from, or is associated with the fear of eating. Perhaps the child may have experienced a choking incident, or might have gotten an episode of the stomach flu the last time he/she tried to eat.

In other case, limited or restricted food preferences becomes the reason of the development of the disorder as patients tend to avoid eating while they are for instance, at work, at a friend’s place, or eating out with the family. It has been observed that excessively healthy eating such all an all organic diet can limit food intake and can cause an imbalance of the nutrients that the body requires to carry out normal functions. There are certain subtypes of the disorder. These are:

In this condition certain emotional problems and issues can lead to adverse affects on the appetite, and eventually lead to the avoidance of food. This condition is commonly mistaken as anorexia nervosa of childhood onset but there are various differences that can set the two conditions apart. In this case, there are a number of emotional difficulties that can lead to the avoidance of food, such as depression and anxiety. The patients are generally aware of the fact that they are experiencing eating difficulties, or that they are losing weight and sometimes may also express the urge to eat more than usual. It has been noted that in some cases, the sufferers of this particular condition have been known to have inclinations towards losing weight and being thin.

In this disorder the child only tends to eat selective food types that he/she feels are “safe” or “acceptable” to eat. This can also limit food types and also certain brands of food items that the child finds acceptable. A child may also avoid going to parties or other outings where food may be present. Malnutrition has to be considered as the child may refuse to eat any food out of their spectrum of what they consider “safe” food. If the child is encouraged to eat other food items, he/she may show severe distress.

In most cases counseling and psychotherapy may help a child get over their fears in the case of severe food avoidance. Selective eating in young children can also be managed by establishing a feeding pattern and creating an appropriate atmosphere and making meal times a social time for the family3. Medication may need to be used and incase of severe malnutrition, hospitalization is mandatory.