Binge eating disorder is not identified as a mental health disorder by the DSM IV. However, it is listed under appendix B as a possible inclusion in future editions of the DSM. Under this appendix, certain diagnostic requirements are outlined.

The general criteria for binge eating disorder is “recurrent episodes of binge eating in the absence if regular inappropriate compensatory behavior characteristic of bulimia nervosa.” 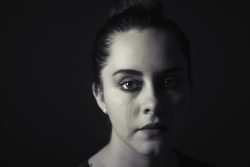 Feeling depressed is common after a binge eating episode.

The binge eating episodes are associated with at least three of the following symptoms:

DSM-IV requires at least 2 days of binge eating. An episode of binge eating without the endpoint can be very difficult to identify; the events tend to be unstructured and flow together.

Another problem with diagnosing binge eating disorder is that many cases can also be diagnosed as bulimia nervosa. Both bulimics and binge eaters may use extreme methods to control their weight.

Your eating habits may be distinctly different from the eating habits of obese people without the disorder and those who suffer from bulimia nervosa. You may have a very chaotic and/or unorganized way of eating such as: periods of binge eating and non-binge eating. In addition, you may be unable to control your eating habits.

How Prevalent is Binge Eating Disorder?

Because binge eating disorder is such a newly-recognized mental health disorder, it is difficult to get accurate statistics about its prevalence. However, current studies suggest that the prevalence rate approximately 2 – 3% of the general population. Approximately 8% of obese people have a binge eating disorder, although some researchers suggest that the prevalence rate is closer to 20 – 40% for obese and overweight people.

If you meet the diagnostic criteria for binge eating disorder typically present with other psychological issues such as a sense of worthlessness and/or social impairment. Approximately 50 – 60% of binge eating cases also involve clinical depression, substance addictions and/or anxiety disorders.

What Treatments are Available for Binge Eating Disorder?

There are several possible treatments for binge eating disorder which have shown effective. In several studies, anti-depressants were significantly effective in helping individuals control their eating habits and reduce the frequency of binge eating occurrences. Serotonin and norepinephrine reuptake inhibitors and anti-consultants have shown effective when treating this disorder.