Bipolar disorder, also called manic depression, is a mental health disorder characterized by periods of mania and depression.  During the manic periods, a person may experience extreme “highs” with symptoms like feeling indestructible, rapid thoughts, inability to stay still and/or engaging in risky behaviors. During the depressive periods, a person with bipolar disorder may feel very sad, pessimistic, lack energy and/or have changes in sleep or eating habits.

Childhood bipolar disorder differs from adult bipolar disorder because the periods of mania and depression typically come and go at much faster intervals.  In adults, one period may last weeks to years whereas with children an episode may last hours. In some instances both mania and depression can occur simultaneously.  Furthermore, pediatric mania and/or depression symptoms may present themselves in different ways such as irritability or other “masked” symptoms. It is important to note that in order for an adult or child to be diagnosed with bipolar disorder, the mood swings must be interfering with the child’s daily life.

Children with manic depression (bipolar disorder) may experience extreme mood swings. In children, it is possible to display both mania and depression at the same time.

During the manic period, children with this disorder may experience:

During the depressive period, children with this disorder may experience: 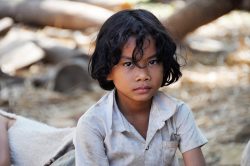 Not enjoying activities they normally would is a depressive symptom of bipolar disorder.

How Common is Bipolar Disorder in Children?

Childhood bipolar disorder was previously considered rare, but there has been an increase (40%) in cases within the last few decades. It is unclear as to whether the increases are the result of societal changes or an increased awareness of the disorder.

How is Childhood Bipolar Disorder Treated?

To date, significant studies on treatment for childhood bipolar disorder have been far and few between. Most experts heavily rely on information from adult bipolar disorder studies to develop a treatment plan for children. Treatment typically involves medications such as mood stabilizers and/or antipsychotic medicines. Side effects commonly associated with manic depression medications include weight gain, tardive dyskinesia, movement disorders and/or polycystic ovarian syndrome.

When treating children with bipolar disorder, parents are encouraged to involve their children in the planning and treatment process. If children feel like they are being forced to take medications, they will become resentful, resistant and/ or defiant.

Studies about the effectiveness of therapy in treating childhood bipolar disorder are ongoing.  Cognitive behavioral therapy appears to be a very promising a treatment for adult-onset bipolar disorder, but its effect on children in inconclusive at this time. Therapy is still suggested for children with this disorder.  Counseling can help children cope with the disorder, foster positive relationships, strengthen their support group and improve their self-esteem.