According to the Diagnostical Manual of Mental Disorders (DSM IV), an individual must meet these requirements to be diagnosed with schizoaffective disorder:

1. Portrays at least two of the following symptoms more than 50% of the time for a minimum of one month (without any treatment):

In cases where the patient has bizarre delusions (ideas/beliefs which are not feasibly possible) or the patient hears voices, then only this symptom must be evident to meet the criteria of 1).

2. The delusional or hallucinatory symptoms were present for at least two weeks without the occurrence of the mood disorder symptoms.

3. The symptoms of mood disorder/s are present for a significant part of the illness period.

4. The symptoms are not a result of drugs or another medical condition.

How many people are affected by schizoaffective disorder? 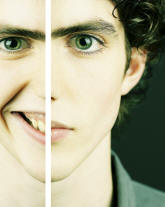 Schizoaffective & Schizophreniform treatment can help overcome the symptoms you may experience.

Because there are differences in the diagnostic approaches taken by mental health professionals, there are disagreements as to the prevalence of this disorder.  However, it can be estimated that schizoaffective disorder is rare and occurs in considerably less than 1% of the general population.  For psychiatric inpatients, schizoaffective  disorder occurs at about 3-5% of cases. Generally speaking, more women, particularly women who are married, develop schizoaffective disorder, with their symptoms appearing later in life than those of men.

Signs and symptoms of schizoaffective disorder

The symptoms of psychosis can include paranoid thoughts and behaviors, becoming delusional, and hallucinating.  With the depressive type of schizoaffective disorder, patients will also show symptoms such as lethargy, deep sadness, and changes in eating or sleeping behaviors. With the bipolar type of schizoaffective disorder, patients will show symptoms of depression alternating with mania.  Manic symptoms can include a lack of need to sleep, hyperactive behaviors or thoughts, and extreme highs.

Is there an effective treatment for schizoaffective disorder?

Mental health professionals use a three-pronged approach to the treatment of this disorder –hospitalization, medication, and therapy. Many times, individuals in need of help are in the midst of a psychotic episode; they’re disoriented and may be incoherent.

To protect them from harm, immediate hospitalization may be necessary.  Treatment with antipsychotic medications such can reduce the chances of a major psychotic episode.  Antidepressants, sleeping pills, and/or anti-anxiety medications may also prescribed, depending on the needs of the individual patient. Supportive, individual psychotherapy centered on the development of coping and social skills can be very helpful.