Most of us are familiar with the symptoms of attention-deficit/hyperactivity disorder, commonly known as ADHD. Children, adolescents and adults with ADHD typically have short attention spans which cause them difficulty when concentrating or attempting to complete a task. They are hyperactive, prone to accidents, and behave impulsively. Unable to focus on a single course of action, they’re pulled in several different directions at the same time, too busy to exercise careful judgment.

It should be noted that a diagnosis of attention-deficit/hyperactivity disorder does not require all of these symptoms to be present. A person diagnosed with ADHD may only be inattentive without evidencing signs of impulsive behavior or hyperactivity; conversely, the person may be impulsive and hyperactive, but still be able to concentrate and pay attention. One of the most important diagnostic criteria is that these symptoms must occur in two or more specific environments, such as school, at home, or (if of working age or an adult), at the place of employment.

Although many experts in this field now believe that imbalances in dopamine and/or norepinephrine in the brain are at fault, they have been unable to pinpoint a cause for this disorder. At one time, it was suspected that high degrees of stress and dysfunction within the family caused ADHD, but that theory has lost the support of the medical community. Further, although ADHD was once referred to as “minimal brain damage”, those who display the characteristic symptoms of ADHD do not seem to have experienced structural damage in the central nervous system. In contrast, it has been proven that children who have received injuries to the brain and neurological damage do not develop attention-deficit/hyperactivity disorder as a result. However, there does seem to be an association with learning disorders, as well as other disorders that affect brain function. 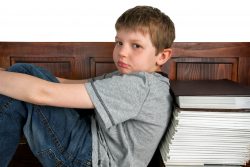 Children with ADHD tend to have a difficult time concentrating.

Some researchers have suggested links between the development of ADHD and prenatal toxic exposure, the use of drugs and/or alcohol during pregnancy, premature delivery, or other injuries to the fetal nervous system. Food additives such as artificial coloring and preservatives or the overuse of sugar have also been mentioned, but there is no evidence supporting these claims. Neither income nor social status have any effect on the development of ADHD.

A higher incidence of ADHD among identical rather than fraternal twins provides some evidence of a genetic factor, as well as the fact that the brothers and sisters of hyperactive children are twice as likely as the general population to be diagnosed with the same disorder. It is also seen more frequently in the biological parents of children with ADHD than adoptive parents of children with ADHD.

Approximately three quarters of children with ADHD show signs of aggression and defiant behavior. However, the cause and effect correlation is not certain; it’s possible that poor family relationships exist independently of the disorder, and each exacerbates the other. If children seem anxious, it’s important to find the source of that anxiety, which may be a feature of ADHD or, conversely, may be the cause of hyperactive behavior and distractibility. This video features a bright, articulate 12-year-old boy discussing his struggle with attention-deficit/hyperactivity disorder.

How prevalent is attention-deficit/hyperactivity disorder?

There is some disagreement as to the prevalence of ADHD among children in the United States with estimates ranging from approximately 2 to 20 percent of those in elementary school. However, a conservative number seems to be 5%, 80% of whom are boys. This translates to an estimated 4 million children affected by the disorder. For about one-third of those diagnosed in childhood, symptoms of ADHD continue into adulthood.

Although some feel that ADHD is an “American” disease, a study done in 2003 indicated that similar numbers are found throughout the developed nations of the world.

What is the most effective treatment for ADHD?

Although many mental health professionals, physicians, and parents have expressed concern about their long-term effects on the developing neurological systems of children, stimulant medications remain the treatment of choice for ADHD. To reduce side effects such as insomnia, antidepressants are sometimes used in combination with the stimulant medications.

Behavior modification therapy can be very helpful; it has been found that a structured environment and a predictable routine of rewards and punishments can reduce children’s anxiety. Parents must understand that even children with ADHD face the normal tasks involved in growing up, including the development of a sense of responsibility.

Although no conclusive evidence of a link between diet and attention-deficit/hyperactivity disorder has been found, some believe that the foods frequently recommended for a healthy brain and nervous system may lessen the symptoms of hyperactivity and inattention. These include high protein foods such as beans, eggs, meat, cheese and nuts, the complex carbohydrates found in vegetables and some fruits, and Omega-3 fatty acids found in, among other foods, tuna and olive and canola oils. Candy, corn syrup, sugar, honey, baked goods made with white flour, and white rice should be avoided.

Where can I find help with ADHD?

The resources of the National Resource Center on ADHD (http://www.help4adhd.org/) include FAQ’s, opportunities to chat with experts and a helpline. There are also many excellent books about this disorder. Two that are especially helpful to adults with ADHD are “Driven to Distraction (Revised): Recognizing and Coping with Attention Deficit Disorder” written by Edward M. Hallowell and John J. Ratey, and “Is It You, Me, or Adult A.D.D.? Stopping the Roller Coaster When Someone You Love Has Attention Deficit Disorder” by Gina Pera and Russell Barkley. Dr. Hallowell also teamed up with Peter Jensen to write “Superparenting for ADD: An Innovative Approach to Raising Your Distracted Child”, a manual for parents whose children have been diagnosed with ADHD.