How is Generalized Anxiety Disorder in Children Diagnosed?

By the standards set in the Diagnostic and Statistical Manual of Mental Disorders 4th Edition (DSM IV), you must show excessive worry and anxiety for the majority of the time during a minimum period of six months and the worry/anxiety must not be confined to only select triggers but a wide range of activities or occasions. Furthermore, you must present at least one of the following symptoms along with the worry/anxiety during the period of at least six months:

The worry/anxiety must be related to numerous triggers. If the worry/anxiety is the result of a specific trigger, you may meet the diagnostic criteria of a different mental health disorder. For example, if you constantly worry about your weight, then you may have an eating disorder like anorexia nervosa. If you have this disorder, you may have an increased risk of drug and/or alcohol dependency, but it is also important to note that the anxiety/worry is not a result of the drug/alcohol abuse. 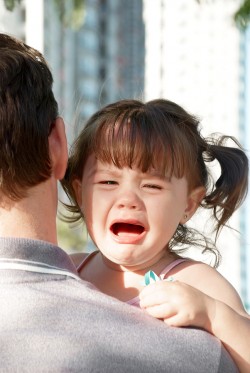 In order for a mental health disorder to be diagnosed, the symptoms must be severe enough to interfere with your normal daily functioning, such as going to school or maintaining relationships and/or it must cause significant distress. If the anxiety is not causing a problem in your daily life, then it is not an anxiety disorder.

What Are The Symptoms of Generalized Anxiety Disorder in Children?

The main symptom of generalized anxiety disorder is a persistent, chronic worry. These worries are more intense than what one would expect from the trigger. Furthermore, the worries do not go away even if the situation is resolved. Rather, the worries manifest as a result of another trigger.

If you have generalized anxiety disorder (children and adults), you may engage in what can be called future-predicting thoughts. You may constantly predict the worst possible outcomes to events despite the fact that the predicted outcome is unrealistic.

The worrying caused by generalized anxiety disorder can become so severe and chronic that it takes a physical toll on you. You may experience headaches, perspire profusely, have trouble focusing, feel nauseous, continuously have to pee, have sleep problems, shake and/or constantly feel tired. You may also experience a decline in academic performance and/or withdrawal from social activities.

How Prevalent is Generalized Anxiety Disorder in Children?

It is hard to find studies about the exact prevalence of generalized anxiety disorder in children and teens. However, the entire group of anxiety disorders has been shown to affect approximately 13% of children, ages 9-13, which is more prevalent than any other group of mental health disorders. Part of the reason that it is so difficult to get an accurate idea of how common generalized anxiety disorder is in children is because it often begins with mild symptoms that progressively get worse. In adults, this disorder occurs in about 3% of the general population, with the mean age of diagnosis in the early 20s. Of those diagnosed with GAD, about half of them claim that their symptoms began in childhood.

Generalized anxiety disorder is likely caused by a combination of factors including genetics, imbalances in your brain and environment. There is ample evidence that anxiety disorders consist of a genetic component. However, some experts dispute this evidence by claiming that anxiety is a learned trait. In children, it is even more difficult to clarify a genetic cause of generalized anxiety disorder as this is directly linked to familial environment. Aside from family, other environmental factors such as traumas or stressful events may play a role in the development of these disorders. Some studies suggest that GAD begins with a stressful event and the normal worry from this event becomes chronic.

How is Generalized Anxiety Disorder in Children Treated?

The most effective treatment for GAD in children has proven to be cognitive behavioral therapy. The cognitive portion of therapy helps you identify your excessive worries. The behavioral portion of therapy helps you cope with the anxiety with a variety of relaxation techniques. You may also receive medications such as antidepressants to help manage the disorder. The use of antidepressants in children is controversial due to disputes in their effectiveness. Furthermore, there is evidence that antidepressants increase the chance of suicide in some young adults.

Note that short-term treatment using either therapy or medications has mostly shown ineffective. The most effective treatment for GAD in both children and adults is a combination treatment with both medication and therapy. Parents and family members are encouraged to participate in therapy.

Generalized anxiety disorder is often a chronic disease. Since it is progressive, if you have this disorder, you should receive treatment to prevent severe complications in adulthood.