5 Binge Eating Disorder Symptoms to Be Aware Of

What are the 5 Binge Eating Disorder Symptoms to Be Aware of? 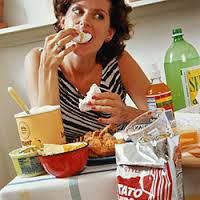 Someone affected by binge eating disorder will likely have some sort of emotional connection with food.

It might be hard to tell if a person has a binge-eating problem. Being overweight or obese does not necessarily mean they have a binge-eating disorder. People that overeat usually eat small snacks of food throughout the day, leading to weight gain. Binge-eaters usually eat large amounts of food in a very short time. To be more certain, here are 5 binge eating disorder symptoms to be aware of:

The binge eating disorder symptoms are not limited to the ones mentioned above. Not all signs are physical symptoms. There can be behavioral and emotional symptoms as well.

Additionally, according to the National Institute on Mental Health, binge-eaters also experience shame, guilt, and distress after their binge eating episodes, which can lead to more binge-eating.

What are Some Emotional Binge Eating Disorder Symptoms?

A binge-eater can often hide their emotions, making it hard to know if they have an eating disorder. More so if they continuously want to be alone. Some of the emotional symptoms that might be noticed include:

Binge-eaters can also feel desperate to control their weight, but fail to do so. They relieve their stress and tension by eating.

Is There Help for Someone Showing Binge Eating Disorder Symptoms?

If you or your loved one are familiar with the symptoms above and feel that a binge-eating disorder is the cause, then seeking treatment should be a priority. By speaking to a qualified counselor on eating disorders, a treatment plan can be created to help in developing a healthier relationship with food. They can talk to you about the various therapies available for treating binge eating disorder.