Eating disorders are dangerous mental health disorders where a person develops an unhealthy preoccupation with their eating habits.  Many people who suffer from an eating disorder become preoccupied with their body shape or distorted perceptions of being too fat or too thin.  The habits become uncontrollable and are usually accompanied by low self esteem or other underlying psychological issues such as depression, anxiety disorders, or substance abuse.

Teens and young adults appear to be most at risk for developing an eating disorder, but eating disorders may also be developed during childhood or later in life.   It isn’t uncommon for a person who has one eating disorder to progress to another unless physical and mental health interventions take place.  According to the National Institute of Mental Health, “It is unknown how many adults and children suffer with other serious, significant eating disorders, including one category of eating disorders called eating disorders not otherwise specified (EDNOS). EDNOS includes eating disorders that do not meet the criteria for anorexia or bulimia nervosa. Binge Eating Disorder is a type of eating disorder called EDNOS. EDNOS is the most common diagnosis among people who seek treatment.”

The person who has a Binge Eating Disorder eats large amounts of food, frequently, and has no control over how much or how often they do so.  These uncontrolled, compulsive, and reoccurring episodes of consuming large amounts of food, without any behaviors to prevent weight gain, such as self induced vomiting or exercise, can lead to a variety of other physical and mental health problems. 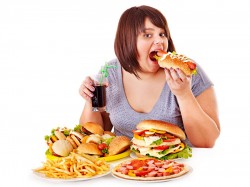 Binge eating disorder can lead to many health problems.

The Physical Effects of Binge Eating Disorder resemble the effects often associated with clinical obesity.  They can be, potentially, serious and many of them present long term health consequences, including:

Binge Eating Disorders cause a lot of unhealthy psychological effects including: