Could it Be Postpartum Psychosis?

Postpartum psychosis suffers may experience any number of psychotic symptoms depending on the severity of the condition. These symptoms typically surface within the first 90 days after giving birth and in some cases, may warrant hospitalization.

It’s not uncommon for women with no previous history of hospitalization to require this level of care when this disorder develops.

According to the U. S. National Library of Medicine, postpartum psychosis affects one to two out of every 1000 childbearing women. Symptoms of postpartum depression can start to develop as early as two to three days after giving birth.

Symptoms that commonly result from postpartum psychosis tend to appear all at once, some of which include:

This disorder greatly impairs a woman’s ability to make good judgments, which can be a danger in cases where child-caring responsibilities fall on the mother. 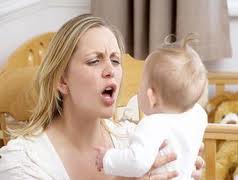 Some women experience delusions and paranoia after having a baby. This can be very dangerous and warrants help right away.

The psychotic features characteristic of postpartum psychosis typically center on strange beliefs or themes involving the baby and childbirth in general. Mothers may view the baby as “inhuman” and harbor worries and concerns regarding the child’s identity. Mothers may also come to view the baby as a source or sign of persecution in their lives.

Psychotic behaviors can vary depending on the severity of the condition. Possible behavior displays may include:

The extreme emotional and psychological turmoil experienced by postpartum psychosis suffers can easily give way to suicidal tendencies, especially in cases where a woman has a past history of depression and/or suicide attempts. Within the first year after childbirth, the risk of suicide increases 70-fold making this disorder the leading cause of maternal death.

Within the general population, woman at risk of committing suicide tend to use passive methods, such as overdosing on pills. Women suffering from postpartum psychosis often take a more aggressive approach that can actually result in death, such as jumping from a tall building or self-incineration.

Risk factors related to postpartum psychosis are conditions and/or situations that predispose a woman to developing symptoms of the disorder. The likelihood of developing this condition increases considerable for women affected by bipolar disorder and schizoaffective disorder. Situational factors such as sleep loss and marital problems can also make a woman more susceptible.

Pregnancy and childbirth processes entail drastic fluctuations in hormone levels that can greatly affect a woman’s emotional stability. This means women who experience a considerable drop in hormone levels after giving birth may also be at risk of developing postpartum psychosis symptoms.