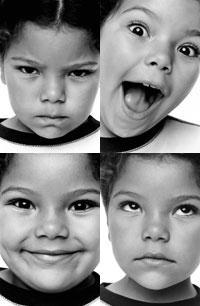 Manic depression in children is characterized by frequent and intense mood changes.

Bipolar disorder, in general, is caused by a chemical imbalance in the brain that’s genetic in origin. While a child may appear to be having behavior issues, chemical processes in his or her brain actually trigger many of the emotional and behavior states that occur. Children with childhood bipolar disorder can cycle through multiple episodes of mania and depression in a single day’s time. Mania episodes bring on periods of hyperactivity. Depressive episodes bring on periods of lethargy, frustration, defiance and temper tantrums. Many children remain in a state of chronic irritability due to the frequent cycling of mood episodes.

Journaling a child’s mood episodes and behaviors is one way parents can help manage their child’s disorder. Information regarding times of day, sleep cycles and behavior displays that take place prior to mood shifts can help doctors better determine the type of treatment a child needs.

Whether parenting alone or with a partner, consistency in terms of setting rules, consequences and rewards can go a long way towards keeping childhood bipolar disorder symptoms from escalating. Instability in any form only works to aggravate a child who already suffers from extreme mood fluctuations.

Children affected by childhood bipolar disorder will often play one parent (or authority figure) against another in order to avoid dealing with an uncomfortable situation. In actuality, a child uses these tactics as a way to cope with or manage difficult situations.

While having boundaries in place is important during childhood development stages, a child with bipolar disorder experiences extreme emotional surges that often overwhelm his or her sense of control. Considering the frequency of mood swings associated with childhood bipolar disorder, problem behavior in a child may or may not lie outside of his or her control.

Understanding the cause behind a defiant stance or destructive behavior enables parents to more effectively manage a child’s symptoms. Flexible boundary-setting means approaching each situation with a practical goal in mind. As some behavior issues, such as not playing in the street, are more important than others, learning to pick your battles can go a long way towards coping with your childhood’s condition.