Infants and toddlers experiencing symptoms of anxiety upon a parent’s departure are at a normal stage of development. When these same symptoms continue into childhood and adolescence, separation anxiety disorder may be the cause.

Infants and toddlers in general have yet to develop a sense of time and place. This lack of development accounts for the feelings of anxiety experienced when a parent moves outside of their visual field. Infants and toddlers are also just learning to distinguish caretakers from strangers, which also contributes to anxiety feelings. Some children move past these feelings sooner than others, though three years old is the standard cutoff age for normal child development.

In the case of children and young adolescents, their sense of time and place has reached a point where they should know a parent will come back. Separation anxiety disorder becomes a factor when a child experiences feelings of worry that are out of proportion with the temporary departure of a parent. When these feelings prevent a child from carrying out normal, everyday activities, a psychological disorder may be at work. 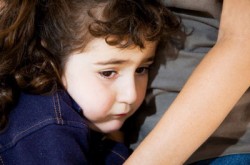 Separation anxiety disorder affects roughly 4 to 5 percent of all children.

In cases where separation anxiety disorder exists as the root problem, a child must exhibit a minimum of three of the following symptoms for at least a month’s time:

Environmental factors have more to do with a child’s home life. Ongoing marital problems or family conflicts can cause a child to develop separation anxiety symptoms. Traumatic events, such as a divorce or the death of a loved one can also trigger separation anxiety in a child.

In cases where a family history exists, medication treatment may be warranted to help reduce symptoms to the point where a child can carry out everyday activities. Therapy sessions may also help a child better understand and cope with anxiety feelings.