Signs and Symptoms of Separation Anxiety

Separation Anxiety is an anxious reaction when a person or object of importance is removed even temporarily. Although considered a normal stage of child development, there are times when separation anxiety becomes so severe doctors consider it a disorder. 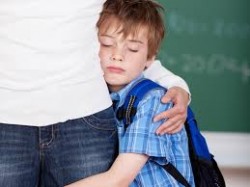 It is common for parents to recognize a child’s separation worries when they first go to school.

All of these symptoms usually go away gradually as a child continues to mature. It is when these symptoms persist that separation anxiety doctors consider it a disorder.

These symptoms continue well beyond the age they should in a normal child. Patients experience these signs at any age and developmental stage even as an adult. Some people have a higher risk of separation anxiety disorder. By recognizing the signs of anxiety disorder doctors can diagnose it correctly.

Who is at risk for separation anxiety disorder?

There are social, event, and mental signs that indicate a person is at risk or is suffering from separation anxiety disorder. These signs are:

When to seek treatment