A certain degree of anxiety affects most everybody at some point in their lives. Anxiety can be a good thing in terms of helping a person prepare for an important event or encounter. When anxiety feelings become so intense as to impair or disable a person’s ability to act or function, a disorder may be at work.

Sadly enough, kids can also develop problems with anxiety that affect their ability to cope with everyday life. According to the National Institute of Mental Health, as much as eight percent of children and teens struggle with feelings of anxiety on an ongoing basis.

According to the U. S. National Library of Medicine, anxiety exists as an all-pervasive sense of apprehension or dread that has no real, identifiable cause. Unlike the type of anxiety experienced in response to certain situations, an anxiety disorder brings continuous feelings of anxiety that affect a child’s ability to cope with everyday life. 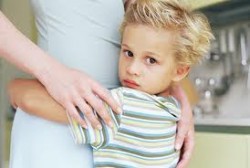 Childhood anxiety can impact the way a child grows up. Treatment can help them cope.

As the most common form of anxiety disorder, generalized anxiety entails a constant state of worry and anxiety that exceeds the degree of stress or problems in the child’s life. Children affected by generalized anxiety tend to harbor feelings of insecurity, lean towards perfectionist tendencies and are eager to please others.

A child struggling with generalized anxiety disorder will exhibit at least one of the above symptoms on a near daily basis for at least six months.

We can help you find treatment for childhood anxiety. Call 800-598-5053 (Who Answers?) toll free for help finding treatment today.

Unlike other types of anxiety disorder, separation anxiety on typically only occurs in children. Children who harbor ongoing concerns about the safety of their parents and/or siblings may be struggling with this condition.

Separation anxiety symptoms in kids include:

A child struggling with separation anxiety disorder will exhibit at least three of the above symptoms on a near daily basis for at least four weeks.

Panic disorders entail periodic attacks of anxiety and/or panic attacks. Panic attacks bring on feelings of terror that can last anywhere from 15 to 30 minutes with residual effects lasting considerably longer.

Panic-like anxiety symptoms in kids are usually triggered by certain environmental cues. Children who experience two attacks within a month’s time may be showing symptoms of a panic disorder. Attacks typically occur without any warning.

According to the University of Maryland Medical Center, panic-type anxiety symptoms in kids include:

Symptoms of post-traumatic stress disorder (PTSD) develop in response to a traumatic or violent event that a child has witnessed, experienced or learned about. In children, feelings of emotional distress are often expressed as agitation or erratic behavior.

Anxiety symptoms in kids generally take shape immediately after the event and last for up to a year afterwards. Kids will continue to re-experience the event and avoid anything that reminds them of it.

PTSD anxiety symptoms in kids typically take the form of:

When left untreated, anxiety symptoms in kids can get so ingrained as to become full-fledged obsessions. By this point, a child has developed a set of behaviors that work to “protect” him or her from whatever danger the obsession holds.

An obsession may center around an ongoing worry the child has or frightening ideas or imaginings the child has. In effect, the child’s behaviors stem from an overinflated sense of responsibility to protect him or herself, or others from a perceived danger.

Obsession-based anxiety symptoms in kids may take the form of:

Anxiety symptoms in kids can develop for any number reasons, though certain risk factors may make some kids more susceptible than others. Both environmental and genetic influences can play a role, though children with a family history of mental illness are most vulnerable.

Ultimately, any form of emotional or psychological distress indicates a certain degree of chemical imbalance in the brain. When left untreated, chemical imbalances tend to grow worse with time, which places a child at risk of developing a more serious psychological disorder. As the years pass, anxiety symptoms in kids also become more so ingrained making this condition all the more difficult to treat.