20 Eating Disorder Symptoms to be Aware Of

In the modern world, there is an emphasis on perfection. It is on television, on the internet, in magazines, and even on giant billboards. Micro-thin bodies and perfection are the cornerstones of advertising lately. With this constant bombardment of “perfect bodies,” it is easy to understand where a variety of eating disorders come from. According to the National Institute of Mental Health, eating disorders affect men and women although it is more prevalent in women. It is also important to recognize eating disorder symptoms. These symptoms vary depending on the disorder.

Most of the eating disorders have symptoms in common. These common symptoms include: 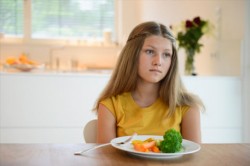 It is common for people with an eating disorder to restrict their eating and to have low self esteem.

Anorexia nervosa is an eating disorder where calories are extremely limited and exercise is excessive. Several symptoms to look for are specific to anorexia. The symptoms of it include:

Bulimia is another eating disorder but instead of being excessively thin, they have a more normal weight. Some of the characteristics of bulimia are:

When to Seek Help

According to the Mayo Clinic, an eating disorder is a condition where eating behaviors that negatively affect health, emotions, and ability to function normally. When eating, dieting, or exercising is a problem, it is time to seek help or inquire about the possibility of an eating disorder. Eating disorders are treatable and with time and effort, the damage done is correctable. If you or someone you know has any of these eating disorder symptoms, it might be time to seek help. Call 800-598-5053 (Who Answers?)  toll free for help finding treatment.