Anorexia is a disorder that causes an individual to severely limit the amount of food that they eat in an effort to remain “thin.” Unfortunately, many people who suffer from anorexia will go through great lengths in order to prevent themselves from gaining any weight. They often exercise excessively and do whatever it takes to control their caloric intake. Various symptoms of anorexia can be seen in the behaviors, emotions and physical well-being of an individual who is suffering from this disease.

Anorexia usually leads to extreme weight loss. The individual may lose excessive amounts of weight in a very short period of time or they may stay dangerously thin. Exercise routines and a lack of food consumption contribute to an abnormally thin appearance in which the individual’s bones are prominent and there may even be excess skin left because there is just no fat on the body. 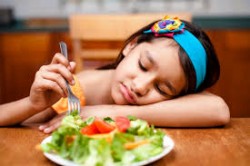 People who are anorexic often refuse food, or eat a very specific and restricted diet.

One of the most common symptoms of anorexia is present when an individual refuses to eat. Some people who suffer from this condition will eat to make others think that they are not suffering from a problem but they will later purge the food out by forcing themselves to throw up.

Merely exercising a lot is not a symptom of anorexia but when an individual is seemingly obsessed with restricting calories and overly exercising to burn off any calories that are consumed then there could be a problem. Anorexia will often lead the individual to focus on nothing but binging, purging, exercising and doing whatever it takes to avoid weight gain.

Many people who suffer from anorexia can’t bring themselves to throw up after they eat but they will take excessive amounts of laxatives following any food consumption in an effort to expel the calories. Using laxatives, herbal products or dietary aids to prevent the nutrients and calories from working within the body are all symptoms of anorexia.

Anorexia will make an individual feel sad, upset with ones self and withdrawn. Most people who suffer from this eating disorder have a strong image that they are not worthy of spending time with others or that they are being looked at differently. Depression and social isolation are very common symptoms of anorexia that results from the extreme self consciousness that occurs as a result of this disease.