“I’ve been having the same dream as long as I can remember. I’m walking down a busy city street at midday. All of a sudden, the sun disappears and I’m all alone. I can’t see anyone, but I know someone’s following me. I try to run, but my feet stick to the ground. I try to scream, but nothing comes out. I know he’s going to get me. I can feel it. I’m helpless and terrified.”

A nightmare is a very distressing or frightening dream that usually forces at least partial awakening. The dreamer may feel any number of disturbing emotions in a nightmare, such as anger, guilt, sadness, or depression, but the most common feelings are fear and anxiety. Nightmare themes vary widely from person to person and from time to time for any one person, but the most common theme is being chased. Adults are commonly chased by an unknown male figure, whereas children are usually being chased by an animal or a fantasy figure.

Your Very Own Nightmare 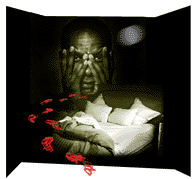 In previous times, nightmares were considered to be signs of devil or demon possession, or a mark of evil. Despite their bad reputation, nightmares are no different from other dreams. In fact, what constitutes a “nightmare” varies from person to person and from dream to dream.

The meaning of dreams is largely symbolic and contextual, so what’s frightening for one person can be harmless—or even funny—for another. “Anything that’s scary is considered a nightmare, but it’s still [only] a dream,” says psychoanalyst Lauren Lawrence, author of several books on dreams, including Dream Keys to the Future.

Ernest Hartmann, MD, is author of Dreams and Nightmares: The New Theory on the Origin and Meaning of Dreams, professor of psychiatry atTuftsUniversity and director of theSleepDisordersCenter atNewton-WellesleyHospital inMassachusetts. He says that what’s happening chemically and neurologically in the dreamer’s body is the same as what occurs during more pleasant dreams. “Nightmares are just long, anxiety-provoking dreams,” he says. “Almost everyone has an occasional nightmare.”

Lawrenceadds that anxiety themes represent one of the largest categories of dreams. From cinematic violence with dropping bombs and exploding buildings, to being chased by unseen evil, to showing up at school and being faced with an exam you didn’t study for, anxiety nightmares, says Lawrence, are messages from your unconscious regarding some unresolved conflict or trauma in your waking life.

A Chance for Resolution

“To me, all dreams are good. The more ferocious or terrifying a dream is, the better it is because it teaches you something,” saysLawrence. She explains that by striving to decode the messages in your nightmare, you can uncover areas in your conscious life that may need attention. Then, by addressing those areas, you can “banish” the nightmare. “The problem is not the dream,” she says. “Fix the life problem and the dream won’t come back.”

Dr. Hartmann has a similar view. He believes that unresolved emotional issues in the conscious life—even dating back to childhood—can result in dreams. In his book, he explains, “If we speak in terms of problem solving, we dream about problems that have not been adequately solved—solved in a total or emotional sense.” When an issue is worked out and understood, it ceases to make a major appearance in our nightmares.

There are several ways people can work out the meaning of their nightmares.

Lawrencesays the first step is to keep a dream log, where each night’s episodes are recorded. Keep a notebook and pen next to your bed. In the morning, immediately upon waking, without opening your eyes or moving around, ask yourself what you were just thinking about. By staying as close to your dream state as possible, you’ll more easily recall your thoughts. Then write it down for later examination.

It’s a bit more challenging helping children to deal with their nightmares. With appropriate encouragement, many young children are able to discuss their nightmares with their parents and will generally not require any other intervention. If a child is suffering from recurrent or very disturbing nightmares, a therapist’s expertise may be required. The therapist may have the child draw the nightmare, talk with the frightening characters, or fantasize changes in the nightmare in order to help the child feel safer and less frightened.

Though you can turn to experts for assistance in interpreting your images, another strategy is to work on decoding the symbols yourself. Look for books that give suggestions regarding the general themes of dreams, rather than those that claim to be the definitive guide to dream analysis. These books often interpret specific dreams but only as examples; your own meaning for an identical dream would likely differ greatly. “It has to be looked at in that light of [the dreamer] being writer, director, actor, and producer,” saysLawrence. “Basically, it’s all about you.”

Lawrencebelieves that, although there are certain universal symbols and themes, dreams and nightmares are extremely personal. “One symbol for you can be emotionally loaded, while for someone else it isn’t,” she says. You’ll need to take actions and objects in your dream in context, rather than at face value, examining what meaning different situations hold and what kinds of emotions they bring up for you. “It’s really a very creative process,” she explains.

Common questions about nightmares. International Association for the Study of Dreams website.

Hartmann E. Dreams and Nightmares: The New Theory on the Origin and Meaning of Dreams.New York: Plenum Trade; 1998.

LawrenceL. Dream Keys to the Future: Unlocking the Secrets of Your Destiny.New York: Dell Publishing; 2000.