Is Social Media to Blame for Heightened Teen Suicide?

Over the course of the past decade, social media sites have changed how people interact with one another in fundamental ways. Online sites, such as Facebook, Twitter, text messaging and video sites enable people to connect in ways that were not possible just 20 years ago.

Not surprisingly, teenagers have latched on to social media to the point where these sites have taken on important roles in their daily lives. While it’s difficult to establish a direct link between social media and teen suicide, the place role social media holds in teens’ lives can definitely have an influence, especially for teens struggling with suicidal inclinations.

Please don’t hesitate to call our toll-free helpline at 800-598-5053 (Who Answers?) if you need help finding teen-based treatment programs.

Social media sites allow for non-stop, round-the-clock user interaction and user-generated content. As a group, teenagers tend to share their personal information, such as real names, photos and locations more freely than other age groups, according to the U. S. Department of Health & Human Services.

Teens also tend to share the “romantic” aspects of their lives on social media. In effect, teens have personalized social media interactions in ways that leave them vulnerable to new forms of abuse and attack that otherwise didn’t exist before. 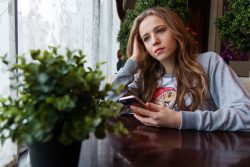 Teens with emotional disorders are vulnerable to the impact of cyberbullying.

According to the American Journal of Public Health, suicide is the third leading cause of death among adolescents. Considering teens have ample access to suicide-related content Online, it only stands to wonder whether the advent of social media has impacted the lives of the most vulnerable teenagers in destructive ways.

With teens so open to social media interactions, bullying-type behaviors have reached a whole new level. Also known as cyberbullying, teens dealing with emotional and/or psychological problems can become easy targets for the destructive effects of online bullying.

According to the Journal of Adolescent Health, Medicine and Therapeutics, cyberbullying effects can cause feelings of humiliation and embarrassment that further isolate affected teens and drive them even closer to carrying out self-harming behaviors.

These sites also house self-harming videos involving burning, cutting and hitting that have been posted by teens and adults alike. For a teenager considering suicide, seeing other people engage in self-harming acts not only “normalizes” these behaviors, but also reinforces inclinations had towards self harm.

Prosuicide sites can be searched for and accessed much like any other type of website. This means teens harboring thoughts of suicide have an easily accessible library of how-to sites, chat rooms and online forums from which to choose.

Teens can also connect with other like-minded individuals and receive a level of support and acceptance that wouldn’t be available through any other means. In effect, prosuicide sites encourage the most vulnerable of teens to act on suicidal thoughts and feelings.

If you’re a concerned parent of a teen that may be at risk, please feel free to call our helpline at 800-598-5053 (Who Answers?) to ask about available teen treatment options.