The Science of Addiction

Most people are able to eat, drink, and exercise without becoming addicted to these activities. But others are not. Why?

Neuroscientists define addiction in medical terms as “a brain disease . . . a chronic, relapsing disease.” Addiction is considered a brain disease because it alters the brain in fundamental, long-lasting ways. That is not surprising when you consider that the brain changes constantly in response to our everyday experiences. Imagine the more dramatic changes produced by powerful substances like alcohol and heroin!

There are 3 related stages in addiction:

At this early stage, the individual experiences the rewarding effects of the addictive drug. Dopamine is the key brain chemical involved at this stage.

At this stage, the individual transitions from recreational use to actual addiction. Glutamine is the key brain chemical involved at this stage.

Scientists have worked out the two major pathways in the brain responsible for addiction. First, there is the mesolimbic pathway mediated by dopamine. Second, the prefrontal cortex, the decision-making center, is responsible for controlling any inappropriate reward responses. It has been clearly shown that drug addiction can lead to physical changes in these pathways.

Neuro-imaging techniques like PET scans and MRIs have documented actual changes in the size and shape of nerve cells in the brains of addicts. Networks of nerve cells determine our feelings and behavior. Drugs influence behavior by transforming the way these networks function, according to Dr. Stephen Hyman, former director of the National Institute of Mental Health. 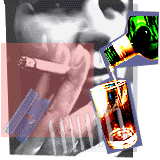 The biological link among all addictions is dopamine. This brain chemical is released during pleasurable activities ranging from sex and eating to more detrimental behaviors such as drinking and taking drugs. “If a drug or an activity produces a sharp spike in dopamine, the odds are phenomenal that people will like it, they’ll experience it as pleasurable, and it will be addictive,” says Alan Leshner, PhD, of the National Institute on Drug Abuse.

A powerful drug like crack cocaine elevates dopamine levels much faster than normal pleasurable activities. It creates the classic drug-induced feelings of exhilaration and power. In a landmark 1950s experiment, scientists stimulated rodent brains and found that the animals kept returning to the place where they received the stimulation.

Getting – and Staying – Hooked

Coming down from a drug high is caused by a decrease in dopamine levels. If you force brain cells to produce excessive dopamine on a regular basis, they become stressed and produce less dopamine. Over time, addicts become depressed and need drugs just to stimulate dopamine to normal levels. They become trapped in a cycle of cravings and addiction to avoid withdrawal symptoms and depression.

Leshner believes that once a person crosses the line from user to addict, the brain is so changed that he can no longer control his behavior. ” . . . The truth is, addiction is not a voluntary behavior. It’s actually a different state,” he explains. “It’s hard for people to understand that, but if you take drugs to the point of addiction, functionally you move into a different state. A state of compulsive, uncontrollable drug use.”

This transformation helps explain why it is so difficult to break an addiction. “There is no motivator more powerful than the drug craving and the need for them,” says Leshner. Cravings are more significant than physical withdrawal in keeping an addict hooked. Drugs like cocaine and methamphetamine, unlike heroin and alcohol, do not produce intense physical withdrawal symptoms, but they do produce overpowering cravings. These cravings can be aroused by external or internal stimuli that are as innocuous as walking by a pub or feeling sad, according to Patricia Owen, PhD, director of Research and Development at the Hazelden Foundation inMinnesota.

Many addiction professionals believe addiction stems from a combination of biological, psychological, and environmental factors. “The Alcoholics Anonymous ‘Big Book’ describes alcoholism as a physical, emotional, and spiritual disease. They were aware of the physiological affects before we were able to do PET scans to actually see the changes,” says Owen.

The progression to addiction can develop this way: Sue may have a genetic or biological predisposition to an addiction. If she grows up in a family and environment without addiction or stress, she may never begin even casual use. However, if Sue grows up in a stressful family or an environment where substance abuse is common and encounters more stresses as an adult and over time, she may move from casual to regular use to full-blown addiction.

We know that children of alcoholics have a higher risk of becoming alcoholics themselves than the children of non-alcoholics. Scientists are also studying whether addicts are born with inadequate endorphins, the brain chemicals that regulate stress.

To be an addict means that addiction has overwhelmed your entire existence. “When you speak to drug addicts about their experiences, they’ll tell you that there is nothing in their life but drugs,” says Leshner. So breaking an addiction often involves major lifestyle changes.

Willpower is not a factor in quitting since addiction also impairs that faculty. That is why Leshner calls it a “relapsing disease.” Most addicts who seek treatment relapse several times before they kick the habit.

Another drug, buprenorphine, has shown promising results in treating narcotics addicts. Useful for detoxification, buprenorphine (usually combined with naltrexone) can also be used for maintenance therapy. Buprenorphine has less associated “high” than does methadone and can be prescribed by psychiatrists and other doctors who have received brief special training. Methadone, in contrast, can only be dispensed from a specially licensed clinic.

It is unlikely, however, that a magic pill will ever be found that “cures” addiction. “No matter what you do with medication, I believe that you will always need psychological treatment to provide support and manage behavior,” says Jan Kaufman, Director of Substance Abuse Treatment at the North Charles Foundation inCambridge,Massachusetts.

On the other hand, aerobic exercise offers a simple and natural way to help combat addiction. During aerobic exercise, dopamine levels are increased in the areas of the brain involved with addiction, and feelings of depression and anxiety are decreased.

Drug and alcohol problems can affect every one of us regardless of age, sex, race, marital status, place of residence, income level, or lifestyle.

You may have a problem with drugs or alcohol, if: