Some people mistake night eating syndrome (NES) with sleep-related eating disorder (SRED), but a person that suffers from NES is fully aware of their food ingestion during the night, while a person with SRED is not. Aside from being aware of the food intake, there can be other night eating syndrome symptoms that can help you or a loved one determine whether a disorder is present or not.

According to the Harvard Medical School, night eating syndrome affects 1 or 2 out of 100 people in the general population. Also noted, researchers have explored its link to weight gain. About 9-14 percent of the people that seek treatment at obesity clinics are affected by this night eating disorder, and as many as 27 percent of severely obese people.

What are the Most Common Night Eating Syndrome Symptoms?

Unlike the occasional snack in the middle of the night that many people indulge in, NES is a persistent behavior and often hard for the affected individual to stop. By becoming familiar with the symptoms of night time eating disorder, you or a loved can seek professional treatment to help take control of NES. Some of the most common symptoms of night eating syndrome include:

To be more assured that a person suffers from night time syndrome, the pattern of symptoms must have been continuously present for two months or longer. Night time ingestion should also be occurring two times a week or more. In most cases, people who suffer from NES may also be dealing with emotional problems. 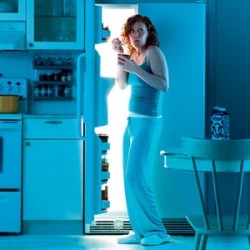 Night eating is a conscious condition that can lead to health and lifestyle problems.

People that suffer from night eating disorder may also be affected with an emotional disorder, and may also suffer from obesity. According to the U.S. National Library of Medicine, other factors underlying NES include genetic predispositions, hormonal and neurochemical disturbances, and mood disorders. Some triggers that may be associated with a mental disorder include:

If you or a loved one are familiar with the night eating syndrome symptoms mentioned above, and feel that you may be affected by NES, then it is recommended to consult with a medical professional and talk about treatment options. Depending on the individual, the severity of NES, and any emotional issues present -treatment may consists of counseling, a nutritional program, and possibly medication if a mental disorder is diagnosed.