Metal Toxicity: Your Brain Under Siege

Under normal circumstances the human body is equipped with a highly effective immune system to attack environmental toxins such as parasites, cigarette smoke, and radiation from the sun. Heavy metals, however, are a group of toxic invaders that can get past the body’s defenses to cause disorders of epidemic proportion. Awareness is the key to prevention.

Ordinary household items can cause metal poisoning and alter normal brain functioning, so it is important to be aware of where these toxins are found and what you can do to avoid them.

Metals are different from many other toxic substances because they are naturally occurring elements, yet interaction with these elements does affect human health. For most people, food consumption and air inhalation are the main sources of exposure to metals, because metals in the soil and water can readily enter the food chain. Other common sources of exposure include consumer products, industrial waste, and your workplace environment.

The Brain as a Target Organ 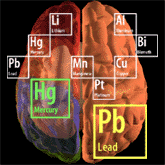 Toxins target specific organs. For example, radiation from the sun can cause skin damage. Likewise, the brain is a target organ for some toxins. The brain is made of special cells called neurons. Although neurons are similar to other types of cells, they have some unique features that place them at risk.

These are general symptoms of central nervous system abnormalities. If you experience these symptoms, they may or may not be caused by metal poisoning. Your doctor can order tests to assess the cause.

Children and Elders at Risk

As the brain develops throughout childhood, the developing nervous system—which includes the brain and spinal cord—is vulnerable to attack by certain toxins. Children consume more calories per pound of body weight than adults, and therefore have a greater opportunity for exposure to toxic metals in food.

Lead affects infants more severely than adults because of rapid brain and psychomotor development. Because children have a tendency to put things in their mouths, dust from lead paint and other environmental contamination poses a particular hazard for kids. Elevated levels of lead in the blood have been tied to reduced IQ, poor school performance, juvenile delinquency, and delayed puberty in boys. High levels of blood lead can be life-threatening.

Throughout history there have been outbreaks of mercury toxicity. In the 1950s, people inJapanwere poisoned when mercury-laden industrial waste contaminated the fish population ofMinamataBay—a staple of the local diet. In the United States and abroad in the mid-1990s, several people experienced mercury poisoning after using a beauty cream produced in Mexico called “Crema de Belleza-Manning” which contained calomel (mercurous chloride).

The United States Consumer Product Safety Commission (CPSC) has alerted consumers that mercury vapors (which have no odor) are hazardous. Mercury is used in a number of common household products, including thermostats, fluorescent light bulbs, barometers, glass thermometers, and blood pressure devices. If the glass or metal that contains mercury in these items is damaged or broken, mercury may spill out, and mercury vapors may be released into the air. Major efforts are underway to reduce the presence of mercury in households. Federal legislation to ban mercury thermometers has long been under consideration, and many states have already passed such bans.

If you spill mercury in your home it is important to assess the amount involved. If this amount is less than or equal to the mercury content of a thermometer, then you can carefully handle the spill yourself. Follow the directions from the http://www.epa.gov/. You may want to print these directions and keep them for later reference in case you cannot use the internet when a spill actually happens.

Spills larger than that found in a thermometer constitute an environmental emergency and require professional assistance. For larger spills follow EPA directions to:

Dental amalgam fillings contain a mixture of several metals including about 50% mercury. Over the years, there has been speculation that some diseases may be attributed to a chronic leaching of mercury from fillings. However, according to the Food and Drug Administration (FDA), the National Institute of Dental Research, and the United States Public Health Service, research does not indicate that dental amalgam is harmful to health, other than an allergy to one of its components. You can request fillings made of composite resins instead, but these have not proven to be as long-lasting as amalgam. The American Dental Association advises people not to have existing amalgams replaced.

Lead can accumulate in the brain and cause injury to the cells, especially in children. The brain has a natural barrier (blood-brain barrier) to prevent the entry of foreign substances, but lead can disrupt this barrier and open the door to drugs and toxins. Lead also damages neurons in brain regions that are important for learning and memory, the inhibition of inappropriate responses, and the coordination of muscle movements. That is why it is so important to make sure that children do not eat paint chips or inhale lead-containing dust.

You may be exposed to a daily dose of lead if you use dishes with a lead-based glaze or leaded crystal glasses. Although newly manufactured products have a warning label indicating lead content, older pieces—especially antiques—may not be marked.

Exposure to lead from plumbing pipes and fixtures is also a problem because lead leaches into the water supply.

Lead-based paint is another source of lead poisoning. Many homes built before 1960 were painted with lead-based paint. The lead can be found in house dust, which can easily be inhaled. Various state governments have strict deleading policies that are in effect every time a house is sold. Your local health department may have programs that can help you determine whether your house has lead paint hazards that may pose a risk to children.

It is easy to see how aluminum enters the human body, given its prevalent use in antacids (eg, Maalox Advanced Regular Strength, Mylanta), pain relievers (Bufferin), antiperspirants, cosmetics, and pots and pans. There are plenty of less obvious aluminum sources including many of our foods and drinking water sources.

While aluminum is actually the most abundant metal in the earth’s crust, it appears to have no natural function in the human body. Perhaps for this reason, less than 1% of ingested aluminum is absorbed from the gut, and primarily removed by healthy kidneys. If not removed, aluminum may damage the brain. Some patients with severe kidney dysfunction develop dementia and other neurological problems if aluminum is allowed to accumulate in their bodies.

While it has been known for years that aluminum is found in the brain of persons with Alzheimer’s disease, scientists still do not know whether aluminum causes Alzheimer’s disease. Experts do not currently recommend that persons with normal kidney function limit their intake of medications containing aluminum, modify their food intake, or choose nonaluminum cooking utensils. New knowledge may eventually lead to a better understanding of the risks associated with this exceedingly important and common substance.

Many metals play important roles in the body’s normal functioning, but can cause serious injury if absorbed in excess or if not properly excreted from the body. Metals known to cause bodily injury are manganese, iron, copper, thallium, and cadmium. Lithium is highly effective as treatment for some disorders, but its blood levels must be measured frequently because overdose leads to serious toxicity. Mercury, lead, and arsenic (not discussed in this article) are probably the most serious metallic threats to human health. Neither mercury nor lead have any role in normal human functions. Our goal as a society should be to ensure that we and our children are exposed to as little of these substances as possible.