What is Body Dysmorphia?

While it’s only natural to take care in one’s grooming and appearance, like anything else done to the extreme, obsessing over how the body looks can become the source of considerable distress and dysfunction in a person’s daily life. For people struggling with body dysmorphia, any bodily flaws or irregularities –whether real or imagined- become the focus of their attention within any given day.

It’s not uncommon for someone to be dissatisfied with certain aspects of his or her body, especially during the teenage years when the body goes through ongoing change. Once feelings of dissatisfaction start to overtake a person’s ability to cope or function in daily life, body dysmorphia, a very real personality disorder, has likely taken hold.

As with other types of personality disorders, body dysmorphia may co-exist with other psychological problems or play a part in the development of other psychological disorders. While this condition may seem somewhat frivolous from the outside looking in, body dysmorphia can cause considerable distress in a person’s life, so treatment for this condition may well be warranted.

If you are struggling with BDD know that treatment can help you cope with and overcome your symptoms. Call to find help today.

Classified as a DSM-IV personality disorder, body dysmorphic disorder or BDD entails ongoing feelings of distress and preoccupation regarding how one’s body looks. Considering preoccupation and obsession lie at the heart of these feelings, this condition exists as a type of obsessive-compulsive spectrum disorder.

People struggling with BDD experience a poor quality of life overall due to feelings regarding their body. In effect, the time and energy invested in this condition causes sufferers considerable impairment, both psychologically and socially.

The degree of distress associated with this condition can cause a person to feel overwhelmed by fears of becoming deformed or disfigured. In effect, sufferers experience ongoing misery throughout the day to the point where they may start crying out of feelings of desperation and shame. 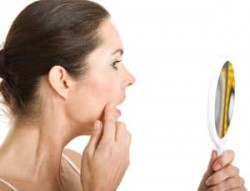 BDD is a serious mental health condition where a person is dangerously preoccupied by perceived flaws in their appearance.

More than anything else, a preoccupation(s) with a perceived defect in appearance most distinguishes body dysmorphic disorder. Regardless of how slight any one imperfection may be, a person’s concern and response is noticeably excessive.

Perception, for the most part, drives these behavioral and emotional responses, so imperfections may be real or imagined depending on the severity of a person’s condition. Someone struggling with BDD will likely fixate about any one perceived defect for a minimum of one hour a day.

As with any personality-based disorder, body dysmorphic disorder affects a person’s ability to function socially as well as within a workplace or school setting.

According to the U. S. National Library of Medicine, an estimated 2.4 percent of the general population meets the criteria for body dysmorphic disorder. By comparison, BDD disorders are more common than other more well-known conditions, such as schizophrenia and anorexia.

Considering the level of attention devoted to looks and appearance in the media and in everyday society, the relatively large number of people suffering from this condition shouldn’t really come as a surprise. In actuality, BDD prevalence is likely underreported due to the shame associated with this condition.

Do not let stigma or shame keep you from seeking treatment. Call to find the help you need today.

Appearance-based preoccupations can take any number of forms. Someone struggling with body dysmorphia may actually be preoccupied with anywhere from five to seven different areas of the body at a time.

This type of preoccupation may also refer to a person’s overall appearance in general, such as his or her muscle mass. In this case, a lack of muscle mass likely becomes the perceived defect and resulting obsession.

Body imperfections most often targeted include –

On average, skin-based defects make-up 73 percent of all body dysmorphic disorders; defects involving the hair, 56 percent and defects involving the nose comprise 37 percent of all BDD conditions. In terms of amount of time spent thinking or obsessing about any one defect, 40 percent of those affected spend three to eight hours per day while an estimated 25 percent spend eight hours per day obsessing about perceived defects.

As with any obsessive tendency, someone with body dysmorphia can’t control or resist the urge to obsess on his or her appearance. Consequently, these intrusive thought patterns can easily cause a person considerable anxiety and distress.

According to Harvard Health Publications, it’s not uncommon for body dysmorphia to co-exist with other types of psychological and/or physical disorders. Over time, the symptoms that come with BDD can predispose a person to developing other psychological conditions, some of which include –

While psychological dysfunction acts as the driving force behind body dysmorphia, the emotional distress that comes with this condition can give rise to actual physical symptoms. This is especially the case for someone who views his or her weight as the problem, in which case BDD takes on the characteristics of an eating disorder.

Body dysmorphia symptoms can become the source of considerable turmoil, leaving a person open to certain risk factors, such as suicidal tendencies and inclinations towards violence. For example, an estimated 80 percent of BDD suffers report harboring suicidal thoughts with as many as 25 percent actually attempting to kill themselves.

Likewise, symptoms involving intense anger and even rage can drive a person to become violent out of frustration. As many as 33 percent of those affected by body dysmorphia report having attacked another person or destroyed property out of anger and frustration. The most often reported reasons for these outbursts include –

In cases where bodily defects are more so imagined than real, an antipsychotic medication, such as risperidone may be administered in low doses alongside an antidepressant. Cognitive-behavioral therapy treatment also works well in helping a person redirect his or her thinking patterns away body image and towards more constructive, relative areas in daily life. We can help you find the best treatment for your needs. Call today.