Avoidant Restrictive Food Intake Disorder (ARFID) is a new diagnostic category in the most recent Diagnostic and Statistical Manual of Mental Disorders, Fifth Edition (DSM-5). Traditionally, eating disorders that did meet the criteria for anorexia nervosa or bulimia nervosa were categorized as Eating Disorders Not Otherwise Specified (EDNOS).

By categorizing conditions for a person suffering from ARFID, treatment professionals hope to gain a better outcome for those individuals who exhibit unique characteristics regarding their struggles with eating foods and receiving appropriate nutrition and energy needs. 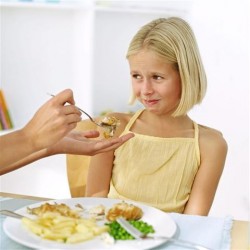 People with avoidant eating disorder refuse food to the point where they are underweight and malnourished.

According to the American Psychiatric Association” a large number of individuals, primarily but not exclusively children and adoles­cents, substantially restrict their food intake and experience significant associated physiological or psy­chosocial problems but do not meet criteria for any DSM-IV eating disorder.”

Typically, infants and children, who suffer from ARFID have developed a problem with eating or feeding that significantly causes weight loss or inability to grow. The problems are characterized by:

Children can be very picky about their foods and they may avoid foods of a certain type for a while, but, when there is a persistent struggle with eating resulting in health concerns, clinical treatment may be necessary. Common symptoms of ARFID include: