5 Reasons to Get Treatment for ADHD in Adults

Children and teens diagnosed with ADHD have a difficult time interacting with peers, keeping track of daily tasks and performing in the classroom. ADHD in adults comes with similar challenges.

Not surprisingly, an estimated 10 to 60 percent of children affected by this condition carry ADHD symptoms into adulthood, according to the National Center for Biotechnology Information. While hyperactivity most characterizes the childhood disorder, symptoms of ADHD in adults take somewhat different forms considering the maturity level involved.

ADHD in adults manifests in different ways, though three common threads run through the types of symptoms associated with this condition:

Symptom types can vary from person to person with some people displaying more of one trait than another. Someone exhibiting ADHD in adults will likely feel overwhelmed on a frequent basis, which only works to aggravate his or her symptoms. For those affected, getting needed treatment help can make a tremendous difference in their everyday lives. 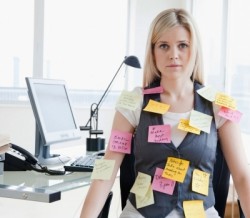 Adult ADHD can interfere with your ability to work, care for yourself, and do basic everyday tasks.

According to the National Institute of Mental Health, 4.4 percent of American adults struggle with ADHD symptoms. Symptoms can be both behavioral and emotional, both of which hamper a person’s ability to manage daily life.

As with children, ADHD in adults stems from neurotransmitter chemical imbalances in the brain, most especially serotonin and dopamine. Both dopamine and serotonin regulate major systems throughout the brain and body, so any imbalances can wreak havoc on a person’s physical and mental well-being.

Part of the reason why ADHD in adults appears in different forms has to do with each person’s individual chemical make-up and how far out of balance neurotransmitter chemicals have become. For instance, dopamine plays a pivotal role in regulating impulse control, whereas serotonin helps regulate cognitive functions. Someone with low dopamine levels will likely have trouble controlling his or her impulses, while someone with low serotonin levels will have difficulty concentrating and staying on task.

If you or someone you know is showing signs of ADHD in adults, here are five reasons to get needed treatment help.

5 Reasons to Get Treatment for ADHD in Adults

Impulsiveness and hyperactivity make for a volatile combination in the face of everyday stressors. ADHD in adults leaves sufferers highly sensitive to stressful situations.

According to the American Psychological Association, an ADHD adult can quickly become overwhelmed when faced with a problem. In turn, this reaction exacerbates other ADHD symptoms, including:

Stress can trigger a domino effect of ADHD symptoms, which only works to further increase a person’s stress level. In effect, these reactions become a vicious cycle where stress triggers ADHD symptoms and symptoms trigger more stress. This experience can make it extremely difficult to function in the workplace or within any environment where problems are likely to come up.

Whether at home or in the workplace, taking in information and following directions makes up a big part of most anyone’s day. ADHD in adults makes it difficult for a person to pay attention for prolonged periods of time.

This trait leaves a person open to making careless mistakes that could have been avoided. At the workplace, this type of behavior can have costly consequences.

The inattentiveness associated with ADHD in adults can be especially trying for adults who go back school to try to further their education. In this case, inattentiveness in the classroom can make schoolwork all the more difficult to do.

With childhood ADHD, hyperactivity appears as the most prominent characteristic of the disorder. With ADHD in adults, symptoms of hyperactivity take a different, more subdued form.

Rather than running in circles or squirming in one’s seat like ADHD children do, adults experience hyperactivity as:

Someone who struggles with the three main traits of ADHD in adults (impulsiveness, hyperactivity and inattentiveness) will likely have difficulty organizing his or her daily activities. The combined effects of hyperactivity, inattentiveness and impulsiveness naturally breed chaos and disorganization, which only further aggravates a person’s ability to cope.

Organizational problems may take the form of:

5. Difficulty Interacting with Others

The symptoms associated with ADHD in adults drive those affected to engage in what would be considered inappropriate behavior by others. For instance, inattentiveness makes it difficult for a person to listen while others are talking.

Likewise, hyperactivity breeds impatience, which sees ADHD adults talking over others during conversations or blurting out inappropriate remarks. ADHD adults also have difficulty picking up on nonverbal cues, such as facial expressions or body language, which can also stunt interactions with others.

ADHD in adults leaves sufferers open to daily disappointments that ultimately start to wear away at their self-esteem. Letting others down, failing to satisfy work expectations and interpersonal conflicts can leave a person feeling overwhelmed for much of the time.

These effects coupled with ongoing brain chemical imbalances can create conditions for other types of psychological problems to take root. When left untreated, ADHD in adults can breed depression and/or psychological disorders that only work to worsen ADHD symptom severity.

Under these conditions, it’s not uncommon for ADHD suffers to attempt to self-medicate symptoms using drugs and alcohol. Considering the addictive potential inherent in drug and alcohol use, a person’s condition can quickly go from bad to worse once substance abuse problems take hold.

For these reasons, getting treatment for ADHD in adults can save those affected much heartache and frustration as symptoms will only get worse with time.