Do People Use Drugs to Cope With Eating Disorders?

According to the National Library of Medicine, “Eating disorders are serious behavior problems.” In this sense, they can be strongly compared to drug abuse and addiction, and many individuals who experience the former actually attempt to use the latter in order to cope with their situation. Unfortunately, this only makes things far worse for the individual.

Individuals who have eating disorders are often obsessed with their body image and weight, and many will do whatever they can to maintain the body type they believe they should exhibit. Some individuals with the eating disorder anorexia nervosa will use pills to cause themselves to urinate or to force bowel movements. The drugs used for this purpose can include water pills, diuretics, enemas, or laxatives (US Department of Health and Human Services). Someone with anorexia may also take diet pills in order to decrease their appetite. While the drugs mentioned above are not necessarily addictive, an individual may begin to abuse them to a serious degree, causing their body undue stress and creating serious side effects.

Someone with an eating disorder may abuse diet pills in an effort to lose weight.

While this is less common, a person may begin to abuse other types of dangerous and addictive drugs, like cocaine for weight loss, which can lead to drug-seeking behavior, overdose, and other risky and sometimes even deadly outcomes. A person may also abuse illicit or prescription drugs in order to cope with the side effects of the eating disorder itself, an issue that will only increase the problems associated with the person’s condition.

In addition, the National Institute on Mental Health states that men and boys may be more likely to “use steroids or other dangerous drugs to increase muscle mass,” which can be part of an eating disorder. This sort of action is also dangerous and can lead to serious side effects as well, including addiction.

How Can Co-occurring Drug Abuse and Eating Disorders Be Treated?

These issues must be treated together, as a person who is struggling with both problems will likely relapse back to the other if only one is treated. Eating disorders are serious problems that require behavioral therapy, and fortunately, drug abuse and addiction can be treated the same way. The individual will learn to:

Sadly, many people abuse drugs as a coping mechanism for eating disorders or to further the dangerous goals of these disorders. However, once these issues are treated together with respect to the person’s situation and any needs they may have as a patient, they can make a change in their life for the better. If you have more questions about eating disorders or substance abuse, call 800-598-5053 (Who Answers?) 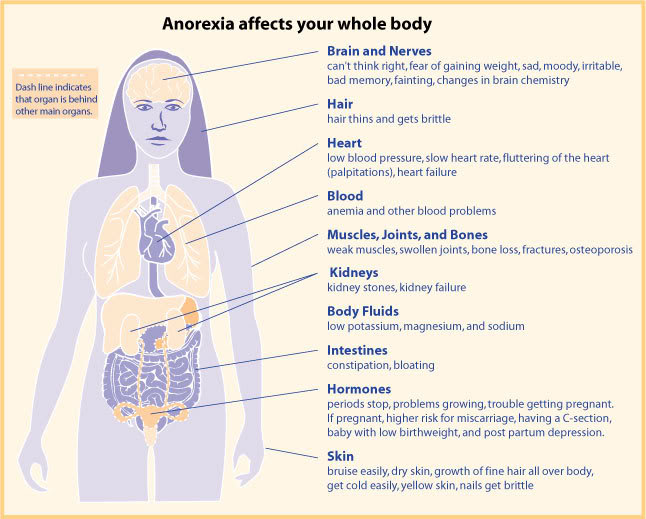 The Dangerous Effects of Anorexia & The Need for Treatment

Restricting your eating, engaging in excessive exercise, and doing any of the other activities associated with anorexia are very dangerous, and can lead to severe health problems.