Understanding the Dangerous Effects of Alcoholism

Alcoholism remains the highest ranked substance-based addiction in the U.S., as well as across the globe. Society’s overall acceptance of alcohol use has placed those most vulnerable at the mercy of alcohol’s addictive effects.

A person can easily go from casual drinking to “stress” drinking under the right circumstances. Before long, alcohol can become a necessary part of coping with everyday life.

According to the Centers for Disease Control & Prevention, as many as 80,000 Americans die each year from alcohol-related conditions. In total, alcohol abuse accounts for an estimated 30 years of life lost for each fatality. These figures make alcoholism the leading lifestyle-related cause of death in the United States. 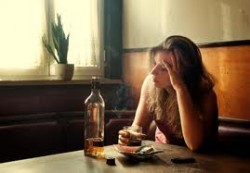 Alcoholism can lead to mental health struggles, physical issues and much more.

Alcohol works as a depressant agent that slows down brain and central nervous system functions by interfering with neurotransmitter processes. Brain neurotransmitters act as chemical messengers, which transmit information from one part of the brain to another.

These effects become more so pronounced in people who drink on a frequent basis. Over time, the effects of alcoholism cause chemical imbalances to take root in brain.

As chemical balances increase the brain loses its ability to regulate central nervous system functions. With continued excess drinking, the effects of alcoholism diminish brain functions to the point where various systems throughout the body start to break down, according to the University of Maryland Medical Center.

Effects on the Body

The dangerous effects of alcoholism on the body have a lot to do with how the body metabolizes alcohol. While most of the alcohol metabolism process takes place in the liver, any excess amounts remain in the bloodstream until the liver catches up, according to Brown University Health Education.

For someone who binge drinks or drinks large quantities on an ongoing basis, the effects of alcoholism leave cell and tissue materials in a saturated state since the liver can only metabolize so much alcohol at a time.

The effects of alcoholism on the brain and body pave the way for alcohol dependency to develop since these effects accumulate over time. The brain’s chemical equilibrium and cell/tissue structures continue to deteriorate as the body becomes more dependent on alcohol to maintain normal function.

Before long, alcohol dependency takes root within a person’s overall psychological make-up in terms of influencing his or her priorities and motivations. Psychological dependency develops out of a severely compromised brain chemistry, making alcohol the “end all and cure all” for managing one’s everyday life affairs.