Bernadette kept her hands folded on her lap as she rode the glass elevator up the 50-story building. She stopped at the eighth floor and looked down. So far, so good. The elevator wasn’t real, but Bernadette’s fear of heights was. She was conquering acrophobia by riding elevators, crossing bridges, and looking out of high-rise windows—without ever leaving her therapist’s office.

New Twist on an Old Theme

Virtual reality is an alternate approach to traditional “exposure” therapy, in which people are gradually and increasingly exposed to what they fear in an attempt to desensitize them to those fears. The new twist is the use of computer technology. The technology creates three-dimensional virtual worlds in which participants immerse themselves and learn to control their feelings and emotions about their phobias—in the confines of an environment in which they feel safe. Phobias might center on spiders, driving, heights, or flying.

A trip to a virtual world requires a computer, special software, and a helmet equipped with video screens and headphones. Electromagnetic sensors monitor heart rate and other physical responses. Once you don the helmet, the trip begins. The therapist monitors what you see on a computer screen and also manipulates some or all of the sensory input.

Afraid of flying? Experience takeoff, flight, and landing without ever physically leaving the ground. 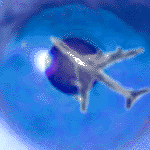 The patient enters the computer-generated passenger cabin of a virtual airplane and experiences the various aspects of flying. A head-mounted display, stereo sound, and tactile stimulation are provided. The patient is gradually exposed to a variety of common flying situations such as:

During every step of the virtual flight, the therapist can see and hear what the patient is experiencing in the virtual plane.

The pioneers of virtual reality therapy are Barbara Rothbaum, a psychologist at EmoryUniversity, and Larry Hodges, a computer expert at the Georgia Institute of Technology. Rothbaum and Hodges led a research team in the first clinical study of virtual reality therapy for treatment of acrophobia. Their results, published in the April 1995 issue of the American Journal of Psychiatry, showed how virtual reality reduced the fear of heights in 10 students over a period of eight weeks.

Rothbaum’s group has also developed modules for a virtual thunderstorm, a virtual airplane, virtual elevator, and virtual footbridges over canyons and balconies for people afraid of heights. A public speaking module has also been created for people who are terrified of speaking in front of a group.

While real-world exposure and virtual reality therapy seem to be equally effective against phobias, virtual reality has some advantages. Because the entire experience is controlled by computer, the number and intensity of stimuli can be modified with mouse clicks and key strokes. More storm clouds for simulated flight or a slower elevator trip are produced in seconds.

In addition, virtual reality is convenient and less expensive than typical exposure therapy. Instead of traveling with a therapist to an airport to conquer a fear of flying, participants confront their phobias from the therapist’s office. Virtual reality therapy for fear of flying offers many advantages over standard exposure therapy, including lower cost, protection of patient confidentiality, safety for the patient and the therapist during exposure, complete control over the virtual flight, and shorter therapy sessions.

At the University of Washington Harborview Burn Center, Hunter Hoffman, PhD, and Dave Patterson, MD, use virtual reality to help burn patients cope with their pain. Burn patients are typically hospitalized one day for each percent of the body burned, says Dr. Hoffman, and wound care occurs daily. Although powerful painkillers help control the pain when patients are resting, they are ineffective during wound care and physical therapy. And the pain can be excruciating.

That’s when snowmen and igloos come to the rescue. A software program called SnowWorld, developed and donated by MultiGen-Paradism Simulations, immerses patients in a “cold” world where they can shoot snowmen and igloos and race through icy canyons during painful wound care and physical therapy sessions. Virtual reality has been used for sessions as long as 15 minutes and with dramatic results. One patient wasn’t even aware that his therapy session had started.

Virtual reality doesn’t work for every patient, but “in physical therapy, 75% of patients showed at least some reduction in pain,” says Dr. Hoffman. It works, he explains, because pain requires conscious attention, but so does virtual reality. Virtual reality distracts people away from the real world temporarily. “They’re just so absorbed in the virtual reality experience that there’s less consciousness available for pain,” adds Dr. Patterson.

At the Department of Veterans Affairs inAtlanta,Georgia, clinical psychologist David Ready helpsVietnamveterans cope with post-traumatic stress disorder, or PTSD. Veterans with PTSD often relive their experiences inVietnamin everyday life. They may, for example, panic when they hear a helicopter or see a flash of light, and they often have vivid nightmares.

Now, some veterans are strapping on a helmet and revisiting a virtualVietnam. While Ready controls the sensory effects from a computer terminal, veterans learn to deal with the past.

“If a guy says he’s walking and suddenly there are mortars coming in, I start the mortars,” says Ready. “If it gets too intense, I’ll lower the volume on the mortars or turn them off. I’m always trying to give him just enough stimuli to get him really in touch with what we call the fear structure, but not overwhelm him.” The constant but safe exposure allows the vets to deal with the stress gradually and notice a shift in their responses.

Researchers have also studied virtual reality therapy for people who have PTSD related to the September 11 attacks, terrorist bus bombings, theIraqwar, as well as road accidents.

Researchers are investigating the use of virtual reality for several conditions, including the rehabilitation of people with brain disorders, eating disorders, depression, and various other conditions.