Magnetic knee, shoulder, and ankle pads, as well as insoles and mattress pads, are widely available and are touted as providing healing benefits.

What is the scientific evidence to support the use of magnets?

Types of Magnet Therapy and Their Uses

The term ” magnet therapy” refers to the use of static magnets placed directly on the body, generally over regions of pain. (A static magnet is an ordinary permanent magnet, as opposed to an electromagnetic coil.) Static magnets are either attached to the body by tape or encapsulated in specially designed products such as belts, wraps, or mattress pads.

Static magnets come in various strengths. The units for measuring magnet strength are gauss and tesla. One tesla equals 10,000 gauss. A refrigerator magnet, for example, is around 200 gauss. Therapeutic magnets measure anywhere from 200 to 10,000 gauss, but the most commonly used measure 400 to 800 gauss.

Therapeutic magnets come in two different types of polarity arrangements: unipolar magnets and alternating-pole devices. Magnets that have north on one side and south on the other are known, rather confusingly, as unipolar magnets. Bipolar or alternating-pole magnets are made from a sheet of magnetic material with north and south magnets arranged in an alternating pattern, so that both north and south face the skin. This type of magnet exerts a weaker magnetic field because the alternating magnets tend to oppose each other. There are many opinions on which one is better.

How Does Magnet Therapy Work? 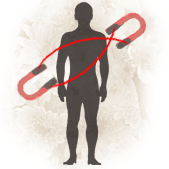 A commonly held misconception is that magnets attract the iron in the blood, thus moving the blood and stimulating circulation. However, because iron in the blood is bound to hemoglobin, it is not free to respond to a magnetic field. Static magnets could affect charged particles in the blood, nerves, and cell membranes or subtly alter biochemical reactions; however, biophysicists are skeptical that commercially available static magnets are strong enough to significantly affect the body. One rigorously designed double-blind trial found that commercially available static magnets have no effect on blood flow. Another found hints that static magnets might affect muscle metabolism, but further research is needed to sort out this possibility.

What Is the Scientific Evidence for Magnet Therapy?

In double-blind, placebo-controlled trials, static magnets have shown promise for a number of conditions, but the evidence is not yet conclusive. For example, a six-month, double-blind, placebo-controlled trial of 119 people with fibromyalgia compared two commercially available magnetic mattress pads against sham treatment and no treatment. Group 1 used a mattress pad designed to create a uniform magnetic field of negative polarity. Group 2 used a mattress pad that varied in polarity. Groups 3 and 4 used sham treatments designed to match in appearance the magnets used in Groups 1 and 2. Group 5 received no treatment. On average, participants in all groups showed improvement over the six months of the study. Participants in the treatment groups, especially Group 1, showed a hint of greater improvement. However, the differences between real treatment and sham or no treatment generally failed to reach statistical significance. This outcome means that the benefits seen could have been due to chance.

Other studies have evaluated magnet therapy for a variety of conditions, such as:

Again, while there are some studies that show magnet therapy can be helpful for treating these and other conditions, this is an area that needs further research since the overall evidence is conflicting.

So, are magnets really so attractive when it comes to alleviating pain? You may experience some benefit, but it is not clear whether the treatment will cause any improvement above and beyond what a placebo could do. Only further scientific study can answer this question.

Additionally, if you have a pacemaker or other implantable medical device (eg, defibrillator, insulin pump, chemotherapy infusion pump), avoid using magnets. They may interfere with the function of these devices.