Excess Noise: Bad for Your Mind and Body

When Pat and Nancy Feeney bought a seaside flat inScotland, they were hoping for a peaceful retirement. Last year, builders began repair work on the ferry terminal opposite their home. Unfortunately, the work could only be done at low tide.

“They would start at 10:00 p.m. and go on for six hours,” recalls Pat. “The next night they’d start an hour later for another six hours. The noise was tremendous.”

The workmen used old and noisy equipment, and left open the acoustic doors supposed to silence the generators. “It was horrendous,” says Pat. “It was stressful and we couldn’t sleep. Each night we’d think, ‘Is this going to start again tonight?'” 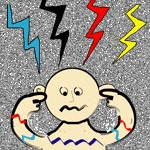 Unwanted noise is a problem worth shouting about. Whether it’s jack-hammering construction workers or your neighbor’s 150-decibel sound system, it can result in mental and physical suffering. According to psychologist Arline Bronzaft, professor emeritus atLehmanCollege, City University of New York, toxic noise has been linked to stress, hypertension, cardiovascular disorders, and even deficits in children’s learning and reading skills.

How Noise Affects You Mentally and Physically

It’s all about control, says Cary Cooper, professor of organizational psychology at the University of Manchester Institute of Science and Technology in theUnited Kingdom.

“The key factor in our reaction to noise is the amount of control we have over it,” he says. “Research has shown that a person can endure a considerable degree of loud noise, so long as the sound can be switched off at will. The thought ‘I can control this’ keeps the stress at a low level.”

A second factor is that noise is unpredictable. The gentle hum of the office soda machine isn’t a problem. The next-door neighbor getting carried away with his new power drill can unravel your sanity.

On a physical level, unwanted, excessive noise can affect physical health because it creates stress and can disrupt sleep.

“If you don’t get a good night’s sleep, you don’t let your body repair itself, and you can’t function well the next day,” says Bronzaft.

How to Combat Toxic Noise

There are several steps you can take to avoid letting noise affect you: