Treatment for Rumination Syndrome in Adults

Rumination involves the regurgitation of undigested food that’s either re-chewed and swallowed or spit out. Commonly observed among cows and other type of animals, rumination can occur in children with mental disabilities as well as in adults.

Rumination syndrome in adults (and children) is usually a reflex behavior rather than a voluntary act. This condition was once thought to be rare overall, partly because it’s easy to misdiagnose.

While more cases of rumination are being diagnosed than in the past, rates of rumination syndrome in adults have likely remained the same with treatment providers gaining a better understanding of the symptoms involved. Treatment for rumination syndrome in adults involves certain behavioral interventions designed to retrain the muscles involved in digestion. Oftentimes, both psychologists and gastrointestinal specialists work together in the treatment process.

Also known as Merycism, someone affected by rumination eats meals in a normal fashion. Within one to two hours of eating, the undigested food moves back up the esophagus and into the mouth, according to the University of Rochester Medical Center. This process typically happens after each meal on a day in, day out basis.

Rumination syndrome in adults differs from vomiting in that the food remains in an undigested state and likely tastes the same when it comes back up as it did when first eaten. For adults and children, this condition usually happens unconsciously.

As the diaphragm muscle normally enables the stomach to contract and digest food materials, rumination syndrome in adults results when these muscles “learn” to relax after a meal rather than becoming active. The actual expulsion of the food back into the mouth may also result from an impaired belching reflex that brings up food instead of gas.

Diagnosing rumination syndrome in adults often involves extensive testing, as the symptoms of this condition can resemble many other gastrointestinal-related conditions. 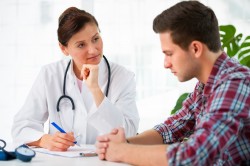 You can work through the symptoms of rumination syndrome with the right help.

Conditions most often confused with rumination include –

Symptoms of rumination syndrome include –

These symptoms must persist for a month or longer before a rumination diagnosis can be made.

Oftentimes, the regurgitation aspect of rumination is mistaken as a type of vomiting disorder, such as reflux disease. The fact that the food remains in an undigested state is a key distinction between rumination and vomiting.

As most cases of rumination syndrome in adults involve both a physical and behavioral component, psychologists and gastroenterologists often work together when treating this condition. In effect, a person relearns how to eat and digest food normally, according to the Mayo Clinic.

Behavior therapies entail helping a person recognize when rumination-type activities occur. At the onset of symptoms, patients engage in abdominal breathing exercises as a way of training the diaphragm to work during the digestion process.

As of yet, there’s no medication treatment for rumination though some people may experience damage to the esophagus as a result of the condition. In this case, medications known as proton pump inhibitors may be prescribed to help protect the esophagus lining until a person progresses through the behavioral therapy process.