In Latin, rumination means “to chew the cud.” In the same vein, someone suffering from rumination syndrome re-chews regurgitated, partially digested food or spits it out, according to the University of Nebraska Medical Center. This definition can go a long way towards helping a person recognize rumination syndrome symptoms.

For the most part, people affected by this condition have little to no control over it since the regurgitation aspect results from a physical reflex response. In actuality, rumination syndrome symptoms have both physical and behavioral causes. 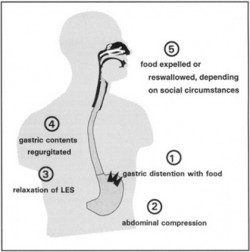 Rumination syndrome begins in the intestines.

Under normal conditions, food is first chewed in the mouth and then further digested by stomach contractions. Stomach contractions rely on the muscles in the diaphragm to contract and expand. With rumination syndrome, diaphragm muscles rather enter a relaxed state so the food in the stomach remains undigested.

Much like the body’s belching reflex, undigested food materials rise back up the esophagus and reenter the mouth at which point a person either rechews the food or spits it out. In effect, the body’s diaphragm muscles have “learned” to relax during and after a meal. Rumination syndrome symptoms result from this learned behavior.

Rumination syndrome can develop in infants less than eight months old as well as in children and teens.

Regurgitation in any form is considered vomiting for the most part. This close association with vomiting accounts for why rumination syndrome symptoms can be easily misdiagnosed. For this reason, more and more adults have been diagnosed with rumination syndrome as healthcare providers gain a better understanding of this condition.

According to the National Center for Biotechnology Information, adults were more likely to be diagnosed with acid-reflux disorder or gastroparesis (weak stomach muscles) conditions than rumination syndrome, especially in cases where a psychiatric disorder exists.

When left undiagnosed or misdiagnosed, people suffering from rumination syndrome can develop a range of health problems, some of which include –

While physicians ultimately make the final diagnosis, being able to recognize symptoms of rumination symptoms can go a long way towards getting needed treatment in a timely manner.