Study authors Reed W. Larson of theUniversityofIllinoisand David M. Almeida at theUniversityofArizonaatTucsonsay that the repeated daily experience of secondhand emotions can travel from one person to another in a family. This may be a means by which parental distress, anger, or depression can lead to the same conditions in other family members, particularly children.

Professors Larsen and Almeida studied 450 families over three years. They peeked in on the activities, moods, and emotional lives of the study subjects through diaries and by calling to ask how they felt. Other families filled out questionnaires about the effect of secondhand emotions in their lives.

“The most consistent finding was that negative emotions can create a chain reaction of distress that moves through a family, affecting everybody’s behavior and eventually, their well-being,” says Dr. Almeida, a professor of family studies and human development. “These emotional spillovers also appear to follow the order of power in a family, from fathers to mothers to children.”

The study also revealed that an emotion can be transformed from one person to another in its transmission. For instance, scorn in one person may induce shame in another. Anger in a powerful person can create anxiety in a less powerful family member. 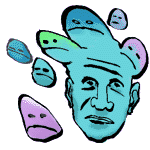 “If couples or family members can just communicate the reason why they are in a bad mood, others at home are less likely to catch that negative emotion,” says Dr. Larson, a psychologist and professor of human development at theUniversityofIllinoisat Urbana-Champaign. “But if dad just bottles up his feelings and snaps at the children when he comes home, they are far more likely to think his dour mood is due to something they have done, and then they become even more depressed.”

If the head of the family is a woman, negative moods will also flow downhill and affect the other family members. Geraldine Downey, PhD, aColumbiaUniversityprofessor, studied single mothers in chronic pain and compared them to similar mothers in good health. She too found that negative emotions are easily transmitted to others in the family. But, when children fully understand that their mother’s bad mood is in response to a painful condition, they do not blame her mood on themselves.

In cases where there is clear justification for ill temper, family members tend to relax more and the toxic emotions are less likely to be transmitted. In one family studied, the husband was experiencing the rigors of the New York Bar Exam and was generally uptight and on edge. However, his wife did not feel intimidated by or responsible for his dour mood because she knew what was causing it.

Techniques for Sparing Your Family

Families cannot allow issues to disintegrate to the point where a parent comes home every evening in a lousy mood, throws things, slams doors, and yells at others. “All our research has shown that highly distressed parents have highly distressed children,” says Dr. Almeida.

“The healthy thing to do is to decompress before coming home,” says Dr. Almeida. “If the commute is a major headache, maybe an uptight dad could do yoga or some other workout before driving home and facing more stress in traffic. The second technique is to just tell everybody at home why you had a bad day.” This gives them a chance to empathize and help you.

With many of today’s families headed by two working parents, both of whom may have stressful jobs, it might be helpful to just say, “There was a big snafu at work, I am a bit grumpy now and if you can cut me some slack, I would really appreciate it.” Some families have a routine where each parent is granted 20 minutes of ‘quiet time’ before rejoining the family. This includes stay-at-home parents, whose stress is often no less than his or her working spouse.

Researchers say that talking openly about stressors also teaches children that not every day is a happy day, and that sometimes people are grouchy. This is also a good time to teach them that they will have to deal with people who are not always pleasant.

While females are more likely than males to communicate about their good or bad moods, says Dr. Almeida, there are ways you can help draw men out. Start by instituting a regular family dinner hour so it is easier for everybody to talk and catch up on the day’s events.