What is Pica Disorder?

The word “pica” comes from the Latin name for magpie, which offers somewhat of hint as to what is pica disorder. In folklore, magpie birds are known for their tendency to gather objects of all shapes and kinds. Likewise, pica-affected individuals gather and eat materials of all kinds.

According to the National Center for Biotechnology Information, people suffering from pica disorder engage in compulsive eating behaviors involving materials that may or may not be actual food. What is pica disorder involves the types of materials consumed as well as the amount that’s consumed.

The various causes for this condition further define what is pica disorder since the triggers that drive this type of eating behavior can vary from person to person. As someone with pica disorder may ingest non-nutritious or even harmful materials on a regular basis, certain health consequences may result when this condition goes untreated. 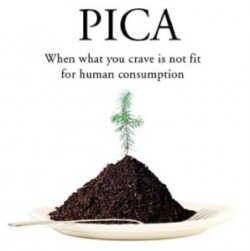 Pica is an eating disorder in which people crave things that are not considered food.

Pica eating disorders span a range of different food types and materials. In medical nomenclature, different terms correspond with the types of materials or foods that become the focus of any one person’s pica condition. These terms are combined with the Greek root phagia, which means, “eating.”

Examples of the various disorder classifications include –

What is pica disorder can come to mean virtually any “eatable” material with a person’s individual preference determining the specific classification.

People affected by pica often experience a great deal of ridicule and embarrassment from family and friends for their behavior. Consequently, many people avoid getting help for the condition. Those that do seek help usually do so for another ailment that may or may not be related to pica behaviors.

Causes – What is Pica Disorder?

What is pica disorder has as much to do with the cause of a person’s condition as it does the behavior itself. In general, pica behaviors originate from either medical or psychological causes.

Medical causes typically result from some form of vitamin or mineral deficiency, though iron deficiency anemia tends to be a common cause in these cases. On the other hand, pica behavior can also be a symptom of a psychological condition, such as obsessive-compulsive disorder.

Cognitive dysfunctions resulting from developmental disabilities can also drive pica eating behaviors. Likewise, pica may manifest as a symptom of a psychotic disorder, such as schizophrenia.

Consequences – What is Pica Disorder?

When left untreated, a person can suffer serious consequences from eating large amounts of non-nutritious materials on an ongoing basis. Under these conditions, what is pica disorder can take on multiple meanings when other conditions develop on top of a pica disorder.

Waiting until a secondary condition develops will only make it that much more difficult for doctors to diagnose pica as the root problem.