Schizophrenia is a severe mental disorder that distorts your perception of reality. According to the Diagnostic and Statistical Manual of Mental Disorders (DSM IV), you must meet specific criteria to be diagnosed with schizophrenia.

1.  You must have at least two of the following symptoms:

***If you experience delusions and/or hallucinations in which you hear voices then no other symptoms are required for a diagnosis of schizophrenia.

2. From the onset of symptoms, you have steadily experienced a decline in social or occupational performance.

3. Your symptoms persist for a minimum of six months with symptoms lasting for a total of at least one month (without treatment).

***Even if your symptoms are not chronic, you can still be diagnosed with schizophrenia. 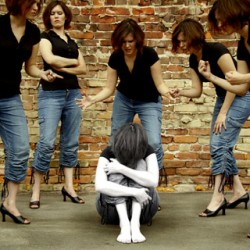 It is important to note that there is a difference between hallucinations and delusions. Hallucinations manifest through your senses rather than just in your mind.  Hallucinations are associated with your auditory function. In other words, you may hear voices that are threatening, obscene or accusatory. In addition, hallucinations can be visual (see), tactile (touch) or olfactory (smell).

Disorganized speech can include rapid changes from one subject to another, constantly repeating the same words and/or making up  words that are either unrelated or do not make sense. You display disorganized behavior when you behave out of character such as behaving “childlike” or exhibiting violent and/or aggressive tendencies.

Schizophrenia is often associated with violence, but if you have this condition, it is highly doubtful that you will physically attack people. In fact, you are more likely to harm yourself then others.

If you are a catatonic schizophrenic, you may be immobile and cannot or will not speak. You may appear oblivious to the external world.

Negative symptoms refer to a flat (exhibiting no emotions or interest) or inappropriate (smiling when angry, laughing about a sad event) affect (meaning the external expression of emotion).

How Many People Are Affected By Schizophrenia?

Approximately 1% of the adult population suffers from schizophrenia.

Film and Book Portrayals of Schizophrenia:

Pages of Life is an award-winning silent British drama film that was released in 1922. This film follows the course of schizophrenia and shows how it affects a young woman and her family. Unfortunately the film is considered lost.

The Soloist is an American British drama film that was released in 2009. This film did an excellent job of portraying the day to day life of a person with schizophrenia. This film focuses on the unlikely friendship between Steve Lopez, a New York Times columnist and Nathaniel Ayers, a homeless schizophrenic musician who went from attending Juilliard to living on Skid Row.

For a very intimate look at schizophrenia and the benefits of medical intervention, you might want to read The Day the Voices Stopped: A Memoir of Madness and Hope byKen Steele.

The exact cause of schizophrenia is unknown at this time. It appears decreased blood flow to the areas of the brain, a smaller than normal hippocampus (the area of the brain that controls memory and orientation), brain lesions and neurotransmitter abnormalities play a significant role in the development and progression of this disorder.

There also appears to be a genetic link to the disorder. Research indicates that people who have at least one family member with schizophrenia have a higher risk of developing the disorder then people with no family history. The scientific assumption is that schizophrenia stems from a combination of biological, genetic and environmental triggers.  For instance: A young woman may have a genetic predisposition to schizophrenia, but no evidence symptoms until she is confronted with stressors such as being in college and having to work a part-time job.

For decades, it was believed that dysfunctional families bred children with schizophrenia. This has been largely disproven. Schizophrenia can occur in any family.

What Treatments Are Available For Schizophrenia?

In the past, long-term hospitalization was the treatment of choice for schizophrenia.  With no effective drug treatments available, there did not seem to be an alternative for seriously ill patients. Now there are several effective medications available for treating schizophrenia. These medications have significantly reduced symptoms associated with schizophrenia and provided these individuals an opportunity to return to their home environment.

It is important to note that serious and sometimes permanent side-effects can occur as a result of schizophrenia-related medications. Side-effects have been reduced in the newer medications, but they still exist. If you experience side-effects it is important that you contact your physician immediately. Common side effects include: muscle rigidity, slowed movements, a feeling of internal restlessness, muscle spasms, involuntary sucking or smacking movements of the mouth and lips (tardive dyskinesia), dry mouth, constipation, difficulty with urination, blurred vision and/or rapid weight gain.

The prognosis for a successful long-term recovery is not positive. Fortunately schizophrenia can be managed through a combination of therapy and medication.

Where Can I Find More Information On Schizophrenia?

The Brain and Behavior Research Fund (www.narsad.org/?q=node/9/disorder#fragment-2) provides opportunities to hear experts discuss current and future treatment options, the benefits of early intervention and many other issues related to schizophrenia.

You can also find helpful information at the National Alliance on Mental Health (NAMI) website, which can be found at www.nami.org

Find out about: The Emotional and Physical Toll of Schizophrenia on Your Family