Symptoms of schizotypal disorder typically start in early adulthood, though some people may see a gradual reduction in symptoms over time. The odd beliefs and behaviors characteristic of schizotypal personality make it difficult for a person to seek out treatment. Treatment approaches used typically involve counseling and medication therapy, when needed. 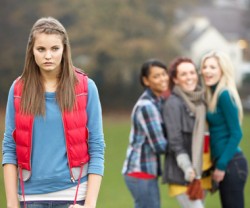 Schizotypal disorder often prevents individuals from fitting in due to their strange beliefs.

Not surprisingly, this type of lifestyle makes it difficult for someone to form and maintain lasting, close relationships. Oftentimes, these beliefs leave a person in a constant state of fear and anxiety. It’s also not uncommon for people suffering from this condition to be bullied and teased on a regular basis.

People with schizotypal disorder do maintain their grasp on reality, though the extreme belief systems that characterize this condition still fall within the schizophrenic spectrum in terms of degree of psychological disturbance. With schizophrenia at the severe end of the spectrum and schizoid personality at the mild end, schizotypal disorder traits fall in the middle of the spectrum.

Other symptoms commonly associated with schizotypal disorder include:

Considering the traits that make up schizotypal personality, people affected by this condition seldom seek treatment for schizotypal symptoms. However, it’s not uncommon for someone to develop depression and/or anxiety disorders as a result of the lifestyle he or she lives.

When this is the case, a person may very well seek treatment for depression or anxiety symptoms. Antidepressant and anti-anxiety medication may be prescribed to treat symptoms related to these conditions.

An overall unawareness of distorted perceptions and beliefs accounts for much of the difficulty people with schizotypal personality face, according to New York University Langone Medical Center. This mindset also gives rise to awkward social skills and unfulfilling relationships with others.

Through regular counseling or psychotherapy sessions, individuals can gain insight into the distorted beliefs that impair their ability to function normally. Both individual and group counseling sessions can help a person recognize distorted thinking processes and develop the types of social skills that build lasting relationships.