Perhaps more than anything else, a person’s personality best distinguishes him or her from anyone else. From a continuum standpoint, some personalities lean more towards the introvert side, while others may take on more extrovert-like traits. Someone diagnosed with schizoid personality disorder leans way passed the farthest limits of introvert-type traits.

According to the U.S. National Library of Medicine, schizoid personality disorder occurs in less than one percent of the U.S. population. This condition can develop as early as puberty, but no later than young adulthood. As one of the more reclusive personality types, any treatment involving social interaction can work well for someone affected by this condition. Psychotherapy, and in some cases, medication treatment can also be of benefit. 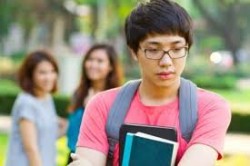 People with this disorder will not want to make relationships with people, but may have an easier time connecting with objects or animals.

A lack of interpersonal relationships in general best characterizes someone living with schizoid personality disorder. It’s not so much that a person has difficulty forming relationships, but rather he or she has no real desire to seek out relationships with others.

In terms of self-perception, people affected by schizoid personality disorder see themselves more so as observers in life as opposed to actually participating or contributing the world around them. Strongly held beliefs regarding self-sufficiency and autonomy dictate much of a person’s worldview in terms of how he or she perceives and relates to self and others.

These traits often lead a person to gravitate towards occupations that require minimal or no social interactions regardless of whether the position falls below his or her abilities. The lack of desire to form relationships further affects a person’s behavior towards others in the form of flat speech patterns, minimal gesturing and limited eye contact with others.

Other symptoms of schizoid personality disorder include:

As with all personality disorders, distorted thought patterns lie at the root of schizoid personality disorder. Cognitive-behavioral therapies can go a long way towards helping a person identify and work through the types of thinking patterns that fuel schizoid disorder symptoms. In the process, a person can develop the types of perceptions that allow him or her to engage with others on a more personal level.

Self-help support groups offer another alternative approach to treating schizoid personality disorder. Support groups designed to encourage interaction among group members can prove highly beneficial for someone who has little interest in forming relationships in general.

While autonomy and self-sufficiency drive a person’s tendency to withdraw from others, a fear of closeness and intimacy often lies at the heart of schizoid disorder.  Support groups can help alleviate a person’s feelings of isolation and encourage social interactions within a safe environment.