Dramatic behavior displays and chaotic lifestyles best characterize Cluster B-type personality disorders. Each of the four Cluster B types differs in how a person interacts with others and the motivations behind his or her actions. In effect, histrionic and narcissistic disorders represent two very different models of behavior, though both incorporate dramatic and/or chaotic-like characteristics. 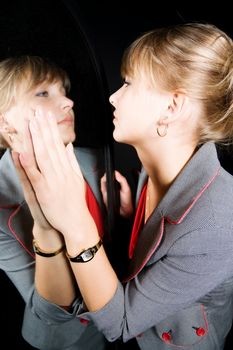 Those with narcissistic personality disorder are extremely self-centered.

The very definition of the word histrionic describes a dramatic, theatrical-type of behavior. People displaying symptoms of histrionic personality disorder engage in dramatic behavior displays as a means for getting attention from others. Ultimately, a histrionic individual bases his or her self worth on the approval of others, which for the most part drives the need for constant attention, according to the University of Maryland.

Symptoms of histrionic disorder include the following:

In effect, these symptoms make it difficult for a person to form genuine relationships with others. The constant need for attention also drives histrionic individuals to employ controlling or manipulative tactics when things aren’t going their way.

The word narcissism originates from Greek mythology, which depicts the god Narcissus who fell in love with his own reflection. In a similar vein, people affected by narcissistic personality disorder approach everyday life from a self-centered perspective, according to Appalachian State University. In effect, a person’s interactions with others as well as his or her intentions and motivations all work towards a self-serving purpose.

Symptoms of narcissistic personality disorder include:

Overall, both histrionic and narcissistic personality disorders make it difficult for those affected to interact with others in areas of family, friends and work. Likewise, perceptions regarding self limit their ability to reach desired goals in life.