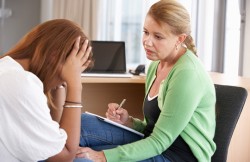 Counseling can help you overcome the symptoms of DPD!

Symptoms of dependent personality disorder generally start to appear around early adulthood. Someone affected by this condition has an overall submissive demeanor, tends to be clingy in relationships and has an overwhelming need to be taken care of.

It’s not uncommon for people with dependent personality disorder to minimize their strengths to the point of demeaning themselves in the presence of others. In order for a person to be diagnosed with this condition, he or she must meet at least five of the following eight criteria:

As people affected by dependent personality disorder can form relationships, have trusting dispositions and easily enter into commitments, the overall prognosis is favorable. Through ongoing psychotherapy, a person learns to use these strengths in constructive ways rather than relinquishing his or autonomy to others.

Overall, treatment for dependent personality can take anywhere from months to years depending on the severity of the disorder.