Dependent personality disorder is characterized by being submissive in nature and placing all decision making, questioning and ruling upon someone else. People who have a dependent personality disorder may not realize that they have a problem nor will they immediately recognize that their thoughts, actions or behaviors are different or inappropriate. Most people with this condition will exhibit a number of symptoms and characteristics that set them apart from the norm.

According to NYU Langone Medical Center, “you will likely be referred to a psychiatrist or other mental health professional where you will be asked about your symptoms,” if your doctor or healthcare provider suspects that you have symptoms of dependent personality disorder. Such symptoms may include: 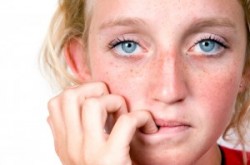 People with dependent personalities are extremely sensitive to criticism.

According to the University of Maryland Medical Center, “people with dependent personality disorder do not trust their own ability to make decisions.” They often struggle with feelings of separation or loss and may go through great lengths in order to prevent from being alone. Many will exhibit characteristics of co-dependency, dealing with abuse and other serious consequences just to remain in a relationship and to avoid being alone.

This condition is responsible for causing some people to become passive both in relationships and in their own routines and life circumstances. Most people with dependent personality disorder will avoid personal responsibility due to the feared repercussions associated with making decisions without the support of others. An overt focus on the fear of abandonment and the risk of disapproval by others often leads to the dependent person being clingy and attached to others regardless of whether the people that they spend time with are abusive in nature.

While the road to wellness is a long journey for those who suffer from dependent personality disorder, the prognosis is generally good if the individual continues in treatment and therapy. Improvements in symptoms, an ability to control negative thoughts and clingy behaviors and stable living are generally seen only with long-term therapy. According to PubMed Health, drug or alcohol use, mental illness and abuse can further complicate matters and should be properly treated in order to ensure the greatest possible chance for the individual to recover from dependent personality disorder.