Use It or Lose It: Preventing Cognitive Decline

Changes in cognitive function, such as slow speed of information processing, are common in normal aging. However, there is considerable variation among individuals, and cognitive decline is not inevitable.

In fact, many older adults appear to avoid cognitive decline into their ninth decade of life, and some even beyond. The best news of all is that some risk factors for cognitive decline are potentially manageable, according to researchers.

Three types of cognitive decline with aging have been recognized:

A number of research studies have identified common risk factors for cognitive decline. Some of these risk factors include:

If you have a medical condition that may be causing your cognitive decline, talk to your doctor.

Vital Activities for a Vital Mind 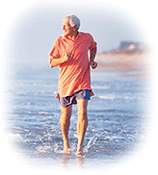 As you age, changes occur throughout your body, including in your brain. But while it may take older adults longer than younger people to do certain cognitive activities, like complex memory tests, some areas of mental ability may even improve, such as vocabulary. Certain activities can assist older adults in increasing their capacity to learn and adapt as they age.

One study has found that having a limited social network is a risk factor for dementia in older persons. Risk factors include living alone or not having any close social ties. Therefore, maintaining many social connections and participating in social activities are recommended. Researchers suggest that social activities help prevent cognitive decline by stimulating the mind and challenging people to communicate.

Participating in leisure activities like reading, playing board games, and playing musical instruments are associated with decreased risk of dementia.

One study, published in the Journal of the American Medical Association, found that frequent participation in mentally stimulating activities are associated with a reduced risk of Alzheimer’s disease. Mental stimulation is not limited to formal education and can include everyday activities such as:

However, while these things certainly won’t hurt, a systematic review of 36 trials found that improvements in memory couldn’t be attributed specifically to mentally stimulating activities.

Ask Your Doctor About Herbs and Supplements

Vitamins and other herbal supplements get lots of attention as possible cures or ways to prevent cognitive decline. But are supplements really helpful in people who are not deficient in certain vitamins? Researchers have studied whether antioxidants, like vitamin E, are able to slow the progression of Alzheimer’s disease. The results have not clearly shown that they are of any benefit. Ginkgo biloba has also gotten a lot of attention as researchers try to find out if this herb has any effect on age-related mental decline. As with vitamin E, the there has been no proven benefit for Gingko in studies. Nor has there been any benefit on cognitive performance found in people taking fish oil supplements.

If you are considering herbs and supplements, talk to your doctor first. There may be safety issues related to other conditions that you have and other medicines that you are taking.

A nutritious, low-fat diet may protect against cognitive decline by providing necessary nutrients and reducing the risk of diseases that contribute to cognitive decline, such as high blood pressure, type 2 diabetes, high cholesterol, and atherosclerosis.

Get Help for Sleep Disorders

Sleep disorders and sleep disruption are common in older people. These may adversely affect cognitive function, particularly memory and learning. Daytime sleepiness, which may be a symptom of a sleep disorder, has been associated with an increased risk for dementia. Older adults may benefit from good sleep strategies, such as going to bed and waking up at the same time each day.

Seek Help for Other Conditions

Talk to Your Doctor

If you are concerned about memory loss or other cognitive impairment, do not try to diagnose or treat yourself. Your doctor can provide assessment, counseling, and treatment.