A Healthy Dose of Optimism

Take a close look at that glass of water. Half empty? Half full? What you see could make a difference, not only in your daily health, but in how long you live. In one study, for example, researchers tracked 839 people over 30 years. In the 1960s, study participants took a standardized test to determine whether they were optimistic, pessimistic, or somewhere in between. Those who scored high on the pessimism scale turned out to have a 19% greater chance of premature death than those who scored more optimistically.

The Power of Optimism

“I believe we have compelling evidence that optimists and pessimists differ markedly in how long they will live,” says psychologist Martin Seligman of theUniversityofPennsylvania. “It is not clear if pessimism shortens life, optimism prolongs life, or both.” 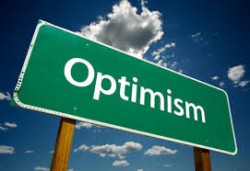 Optimism is part of a healthy life style.

Seligman says there are at least four ways that optimism can affect longevity. Optimists tend to:

For decades, psychologists have studied the link between positive thinking and physical and mental health. According to Seligman, author of Learned Optimism: How to Change Your Mind and Your Life, it is more important to change negative thought patterns into positive ones than to worry about being optimistic. The picture of optimism he paints is not one of Pollyanna-like blindness to reality, but of a learned optimism grounded in accuracy and non-negative thinking.

Why would this be so? In his book Self-help Stuff That Works, Adam Kahn says it is “because optimism and pessimism both tend to be self-fulfilling prophecies. If you think a setback is permanent, why would you try to change it? Pessimistic explanations tend to make you feel defeated, making you less likely to take constructive action. Optimistic explanations, on the other hand, make you more likely to act. If you think the setback is only temporary, you are apt to try to do something about it.”

How can you determine whether you think more optimistically or pessimistically?

“I do not like to use the word pessimistic because most people would never consider themselves pessimistic,” says Khan, “But, many people are willing to admit they are not optimistic.”

Khan, like Seligman and other experts on motivation, defines optimists and non-optimists by how they explain events in their lives. Optimists see setbacks as specific, temporary, and changeable. Because of this, they are motivated to take action. Non-optimists tend to look at setbacks as general, permanent, and hopeless – symptoms of widespread failure that cannot be changed.

For example, an optimist who did not follow through on an exercise routine for a week might say, “I had a lot going on this week. I did not plan my time too well. I will have to do better next week.” A pessimist in the same situation might say, “I have no self-discipline. I obviously will not be able to meet my goals. Exercise just is not for me.”

A Matter of Degree

Dr. Pierce Howard, author of The Owner’s Manual for the Brain, contends that the line between optimism and pessimism is far from clear-cut.

“You are not just an optimist or a pessimist, it is a matter of degree,” Dr. Howard says. “You can be successful in life anywhere along the continuum.” He points out that pessimistic thinkers make great tax accountants, while optimists are more suited for careers in sales.

Mood also has an influence on whether optimistic or pessimistic thoughts dominate your brain, according to Dr. Susan Vaughan, author of Half Empty, Half Full, a book that explores how gaining control over moods can result in more positive thinking.

“Mood is a powerful filter on how we see things,” maintains Vaughan, who sees most people as a blend of optimism and pessimism, depending on the situation.

She points to three methods optimistic people tend to use to lift their moods:

Optimism: Not Always the Answer

Not everyone agrees that the solution lies in being optimistic. “The idea that optimists are healthier than pessimists is overly simplistic,” says Dr. Howard Friedman, a psychology professor at theUniversityofCalifornia,Riverside. “Many times, excessive optimism can be harmful to one’s health. This is especially evident among teenagers, who take many risks.” Friedman contends it can be damaging to think optimistically when it comes to difficult health choices like quitting smoking, using condom, or wearing seatbelts. “I do not agree that in general we should try to make everyone more optimistic. There is absolutely no evidence that trying to do so will improve the general health of the population,” Friedman says.

Seligman concurs that there are times when it pays not to be optimistic, such as when planning for a risky future, when advising those with poor chances for the future, and when trying to be sympathetic to others’ problems. When the cost of failure is high, he advises, optimism is the wrong strategy.

Still, there are times when optimism can be a powerful ally. When achievement is the goal, use optimism. If trying to recover from depression. for example, optimistic thoughts can boost your morale.

Seligman argues that optimism, like other interpersonal skills, can be learned. “The way you explain setbacks to yourself is as much a habit as the way you tie your shoes,” agrees Khan. “It is no harder or easier to change a thought habit than it is to change a physical habit.” He recommends writing about setbacks and practicing arguing with your less optimistic thoughts until a more realistic vision of what has happened and what is likely to happen in the future emerges.

“It takes work, discipline, and focus,” Khan says. “But if you do not think you have these things, those are the first non-optimistic thoughts to tear apart.”